Strikeforce Heavyweight Title or Not, Josh Barnett Says He Must Win - and Finish 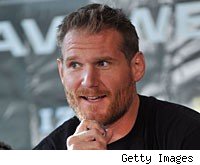 It's been a while since Josh Barnett has walked around a champion. And no doubt, he'd like to get back there again.

No matter, he said. Some gold would be nice, but he'll still be going after Sergei Kharitonov with the same plan to finish him regardless of what might be on the line, now or later.

"Titles are spoils of war," Barnett said Tuesday during a media call for the semifinals of the tournament, which takes place Sept. 10. "You have to go out there and win battles before you can raid the dead of all their belongings."

Of course, that doesn't mean Barnett would turn down a shot to be fighting for the new Strikeforce heavyweight title if CEO Scott Coker says later that's the new plan. (Though Coker said Tuesday the tournament winner won't be the new champion, and a plan for that belt is still under consideration.)

"Honestly, I would love it if the finals of this tournament were for the heavyweight title – I would love that," Barnett said. "I would think that's great. That would add a nice punctuation mark on the end of it. But that doesn't change my attitude toward getting the job done. You have to beat your opponent, otherwise you get to walk home with a black eye and wounded pride."

Barnett (30-5, 1-0 Strikeforce) won his debut with the promotion with a second-round submission over Brett Rogers in the tournament quarterfinals in June. That was his first fight in nearly a year.

But since his last loss, to Antonio Rodrigo Nogueira in Pride nearly five years ago, Barnett has won seven straight – and just one by decision.

It's that finishing ability that Barnett is known for – a whopping 83 percent of his victories, 25 of 30, have come by stoppage. And Barnett said it's his job to continue that against Kharitonov to reach the tournament finals.

And though he didn't call anyone out by name, Barnett said any fighter, regardless of style background, who fights to win on points isn't exactly tops on his list.

"A lot of people take shortcuts in terms of using athleticism and defensive tactics to try and have the right game plan to go out there and win in the mixed martial arts 10-point must system," Barnett said. "The finishing ability is put aside a little bit. But to learn to really finish takes more skill. It comes down to finishing. I go out and finish people."

Kharitonov (18-4, 1-0 Strikeforce) has won five of his last six and will be fighting for the third time in less than a year – something he hasn't done since 2005. Of his four losses, three have been stoppages.

Barnett, who knew of Kharitonov during their Pride days, though they never fought, said his opponent looked good his last fight, a win over former UFC heavyweight champion Andrei Arlovski, but was quick to point out that might not mean much against him.

"He was always a perennial contender and in the upper echelon of the heavyweights," Barnett said. "He looked in the best shape he's ever been and looked pretty dominant against Arlovski – but then again, I'm not Arlovski."

Barnett and Kharitonov headline Strikeforce's Sept. 10 show in Cincinnati, which will air live on Showtime. The second semifinal features Daniel Cormier, who entered as an alternate for Overeem, against Antonio "Bigfoot" Silva.