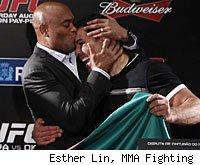 Anderson Silva returned home to Brazil in what was essentially a coronation, riding a wave of euphoric fans to another rout, this time smashing the durable Japanese fighter Yushin Okami. We are still no closer to answering the question that Joe Rogan asked so many fights ago: Who can stop that man?

Silva's next move is anyone's guess. UFC president Dana White says that fighting on the UFC's FOX debut is not happening, so apparently headlining a second mega-show is not in the cards for the long-reigning champion.

So who might be next for Silva? We take a look at the possibilities for him and several other of the UFC 134 participants in this edition of The Forward Roll.

Anderson Silva
Silva should be the main eventer of the FOX show. It's a spot he's earned, if he wants it. It would allow the UFC to showcase their best talent, and give fans the value of seeing him for free. Unless UFC executives changes their mind, that's not going to happen, so it's virtually a lock that he will face the winner of October's Brian Stann vs. Chael Sonnen bout. Either fight is easily sellable, but a Sonnen rematch would draw massive interest.

Yushin Okami
Okami joins a long list of fighters who fell to Silva in title bouts, yet only one -- Rich Franklin -- was able to earn a rematch. It's a long, hard road back to the top for Okami, who took the long path to a title shot in the first place.

After waiting since last November to fight, Okami needs to get back to action quickly. So ideally, he needs to be matched up with a relatively well respected fighter, preferably coming off a loss.

That said, Rua's fights are always exciting, and given his highlight reel, he's easily promotable. Needing less than two minutes to earn victory, Rua can turn around quickly and get back into the rotation. I'd slot him into a bigtime fight in short order.

Forrest Griffin
Griffin's two-fight win streak was halted with a quickness by Rua. Prior to the event, he sounded disillusioned about the fight game, and the result isn't likely to help matters. We also know that Forrest had other matters on his mind: his wife was nearing the end of her pregnancy as he flew to Rio to face Shogun.

Griffin deserves a nice break from the grind as he settles into fatherhood, and hopefully that gives him the time to reignite his fire to train and compete.

Prediction: Griffin returns in the spring against a fighter on the verge of top 10 status, someone like Alexander Gustafsson.

Edson Barboza
Barboza's striking is beautiful to watch, yet he often seems content to hang back and counter rather than attack on his own terms. He is good enough to make that work against most mid-tier competition, but as he moves up the rankings and faces more wily foes, that could lead to trouble.

If I'm the UFC, I put him back in the cage against someone who's going to force him to fight in many different areas.

Ross Pearson
The British fighter still shows promise. He's a fierce competitor, has crisp boxing and comes to scrap. It wasn't enough against Barboza in a close call, but he shouldn't face much of a downward move after putting up a game performance on enemy territory.

Prediction: Thiago Tavares has won two of three; Pearson has won three out of four. That matchup sounds about right.

Antonio Rodrigo Nogueira
Nogueira's win over Brendan Schaub might have been the night's emotional high in Rio. Nog came in as a sizable underdog, after a long layoff, and after admitting he had rushed his return to fight in Brazil for the first time.

The relative lack depth near the top of the heavyweight division should allow Nog to take a bit more time off now and let some other fights shake out. But for those who still have questions about Nog's continuing ability to take a big shot, there is probably a big puncher on the other side of his break.

Brendan Schaub
What a crazy game MMA is. Schaub was riding high, on top of the world as he made his way to Rio for UFC 134. No one would have ever predicted what was to happen next. The fact that Nogueira beat him was no huge shocker, but that he would knock Schaub out came as a stunner. Nogueira had only two knockouts in his entire, storied career prior to that, and has last one had come over six years ago.

While Schaub had dreams of a title shot, instead, it's back to the end of the line for the 28-year-old.

Rousimar Palhares
In victory or defeat, Palhares remains one of MMA's most head-scratching talents. He backed off a sure TKO at UFC 134 to begin a premature celebration, then nearly got knocked out when the fight restarted.

Given his predisposition for unpredictability, who knows what to expect from Palhares in the future? But the man can still fight, so he deserves a big matchup.