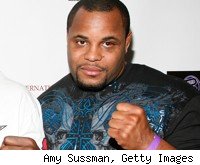 Daniel Cormier has a message for critics of wrestlers, and it doesn't sound like he's going to budge on it anytime soon.

Cormier, one of the most decorated college and amateur wrestlers ever to break into mixed martial arts, has found himself smack-dab in the middle of the Strikeforce Heavyweight Grand Prix against Antonio Silva in the semifinals. And while he believes the fight is his most important test to date, he isn't going to apologize for being a wrestler.

Simply put, the unbeaten heavyweight believes if his opponent can't stop his takedowns, well ... too bad.

While other fighters accused by fans and other fighters of being "lay and pray" practitioners have often tiptoed around the accusations, Cormier is more to the point.

Cormier (8-0, 5-0 Strikeforce) was inserted into the heavyweight tournament as an alternate after Zuffa suddenly cut Strikeforce heavyweight champion Alistair Overeem earlier this summer. After six straight stoppage wins to start his pro career, including five in the first round, Cormier has won back-to-back decisions, both scorecard sweeps.

Against Devin Cole in January, Cormier landed three takedowns. But against Jeff Monson in June, he attempted just two and instead dominated the fight in the standup game. According to FightMetric, Cormier out-struck Monson 110-19 in the fight. So as his overall MMA game progresses, Cormier knows he'll have to fall back on other skill sets besides his world-class wrestling.

"I think it's always good to put on exciting fights," Cormier said. "I like to fight. This is my job. If that means I have to stand with him and fight, then I have to fight. What if I can't take him down? But at the end of the day, it's about winning."

Which might just be Cormier's way of saying that standing and banging may look fun from outside the cage, but he may think twice about being on the receiving end of "Bigfoot" Silva's paws – especially since Silva is coming off a devastating TKO stoppage of Fedor Emelianenko in February.

"Why should I or anyone else that knows how to wrestle give up their biggest advantage?," Cormier said. "If a jiu-jitsu guy can get you down, he's going to use his jiu-jitsu. If a striker can keep you standing, he's going to use his standup ability. It's your job, which MMA is, which fighting is, to learn all areas of the game."

Silva (16-2, 3-1 Strikeforce) has won three straight and nine of his last 10, including a TKO win over one of Cormier's American Kickboxing Academy heavyweight teammates, Mike Kyle. And though he is a Brazilian jiu-jitsu black belt, he's only submitted two fighters in his 16 wins. It's his heavy hands that seem to be feared the most.

Cormier, though, said that while getting hit in the face was foreign to him from his wrestling background when he started MMA, training at AKA – especially with UFC heavyweight champion Cain Velasequez – has gotten him used to it.

"Nobody likes to get hit," Cormier said. "Wrestlers, kickboxers – nobody likes to get hit. But it doesn't affect me. I train with the No. 1 heavyweight in the world on a daily basis, so I actually get hit a lot. And not only from Cain, but from King Mo (Lawal) and Mike Kyle and all the guys I train with. I've adjusted to it because they beat me up so much."

Cormier and Silva fight Sept. 10 in one half of the semifinal bracket of Strikeforce's continuation of the heavyweight tournament in Cincinnati. The other side of the bracket features Josh Barnett vs. Sergei Kharitonov. The winners are expected to meet sometime in early 2012 for the tournament title.