Sam Stout Out, Cowboy Cerrone In vs. Dennis Siver at UFC 137 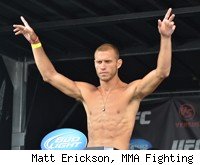 It's not quite what Donald Cerrone wanted, but it'll have to do.

After his quick TKO win over Charles Oliveira at UFC on Versus 5 earlier this month, Cerrone said he would step up and take another fight as soon as possible – especially if it was on the UFC 135 card in Denver, not far from his native Colorado Springs.

The UFC couldn't oblige him with a spot in Denver, but "Cowboy" will step up for Sam Stout to face Dennis Siver in a lightweight bout at UFC 137 in Las Vegas at the end of October. The UFC announced the new fight Monday night, which was first reported by ESPN.com.

Cerrone (16-3, 1 NC, 3-0 UFC) is on the most impressive run of his professional career. Though he started his career 7-0, his current five-fight winning streak has featured two dominant unanimous decisions, including a rout of Jamie Varner in their WEC 51 grudge match, two submissions and his TKO of Oliveira. In that stretch, he has two Fight of the Night awards and a Knockout of the Night against Oliveira.

Stout (17-6-1, 6-5 UFC) was coming off his first stoppage win in the UFC, a brutal Knockout of the Night win over Yves Edwards at UFC 131 in June, giving him four bonuses in his last five bouts, the three previous being Fight of the Night winners.

Earlier this month, Stout's brother-in-law, notable MMA trainer Shawn Tompkins, died unexpectedly. The UFC did not give a reason for Stout's withdrawal from the fight, however. Coincidentally, this will be the second time Cerrone has filled in for Stout. The Canadian was scheduled to fight Paul Kelly at UFC 126 in February, but was injured and replaced by Cerrone, who won in his UFC debut.

Siver (19-7, 8-4 UFC) has been on a tear of his own ever since his first stint in the UFC, which saw him cut after going 1-3 with consecutive losses to Gray Maynard and Melvin Guillard. After one win outside the promotion, Siver has won seven of his last eight in the UFC. The four-time bonus winner has won four straight, including an upset of George Sotiropoulos in February and a decision win over Matt Wiman in July.

The UFC's lightweight title picture has been on hold for a while waiting for the rematch between champion Frankie Edgar and Gray Maynard, whose January draw led to an immediate rematch that was delayed by training injuries to both fighters. The two will meet again at UFC 136 on Oct. 8. Waiting in a jumbled up line for a potential next crack are the likes of Guillard, who also fights at UFC 136, Clay Guida, Ben Henderson – and now, likely, the winner of Cerrone-Siver will enter the discussion.

UFC 137 takes place Oct. 29 at the Mandalay Bay Events Center in Las Vegas and features a main event welterweight title fight between Georges St-Pierre and Strikeforce welterweight champion Nick Diaz, who is vacating his belt to challenge St-Pierre. The co-main event, though not officially announced for that spot, is expected to be a welterweight contenders fight between former champion BJ Penn and Carlos Condit.

The card also features a pair of heavyweight fights between Matt Mitrione and Cheick Kongo and Mirko "Cro Cop" Filipovic and Roy Nelson. And Sengoku featherweight champ Hatsu Hioki will make his UFC debut against George Roop. Though it is not known where the Cerrone-Siver fight will fall on the card, it stands a good chance to wind up on the main card.