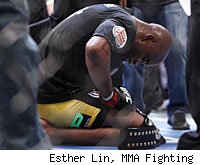 There's plenty of talent in the middleweight division in the UFC. Vitor Belfort is pound-for-pound as hard a puncher as anyone in mixed martial arts. Chael Sonnen's MMA wrestling is first-rate. Demian Maia's Brazilian jiu jitsu is world class.

And yet when we survey the middleweight division, it almost feels like a pointless exercise. Anderson Silva has spent the last five years proving himself to be so far ahead of the rest of the 185-pound class that the rest of the division doesn't seem all that interesting. At UFC 134, Silva spent one round measuring Yushin Okami, then made Okami look like a rank amateur in the second round.

So as we look at the top 10 middleweights in MMA, we're looking at a list of talented fighters, all of whom have either already lost to Silva or would surely lose to Silva. He's head and shoulders above the rest.

Top 10 Middleweights in MMA
(Editor's note: The individual fighter's ranking the last time we did middleweights are in parentheses.)

1. Anderson Silva (1): As great an offensive striker as Silva is, his stand-up defense may be even more impressive. Silva's head movement is so good that he can stand right in front of his opponents with his chin up and his hands below his waist and know they're not going to be able to hit him. He does things that no one else in combat sports can do.

2. Vitor Belfort (3): The combination of Belfort's very impressive knockout of Yoshihiro Akiyama and Chael Sonnen's continued inactivity gets Belfort a bump in the rankings. But while Belfort is saying he wants another shot at Silva, it's hard to see why the UFC would do that. Belfort will need more than one win to get a rematch after Silva's brutal knockout of Belfort in February.

3. Chael Sonnen (2): The one big fight left for Silva at middleweight is a rematch with Sonnen, who's the only person who has really even challenged Silva in the UFC. If Sonnen beats Brian Stann at UFC 136, Silva-Sonnen 2 is the fight to make next.

4. Yushin Okami (4): Prior to meeting Silva, Okami had only been finished once in 31 pro fights, and that was almost eight years ago. Okami is a big, strong guy with a good chin, but Silva toyed with him. That's how big the gap is between Silva and the rest of the Top 10 middleweights.

5. Mark Munoz (5): Munoz is the highest-ranked middleweight who hasn't yet had a chance to face Silva, and his wrestling pedigree would make him an interesting matchup with the champion. We're probably not going to see Munoz vs. Silva outside the Black House gym, however. Up next for Munoz is Chris Leben in the main event at UFC 138.

6. Demian Maia (6): Maia will try to rebound from his loss to Munoz with a fight against Jorge Santiago at UFC 136. Maia is only 3-3 in his last six fights and hasn't submitted anyone since Chael Sonnen at UFC 95, and if he loses to Santiago, he'll drop out of the Top 10.

7. Brian Stann (7): As a charismatic, articulate fighter who won a Silver Star for service in Iraq, Stann is a guy the UFC should want to put front and center on Fox: He's just who the UFC brass should want representing them in front of a mainstream audience. If Stann beats Sonnen at UFC 136, would the UFC consider putting Stann in a middleweight title fight on Fox? Or would that fight be too lucrative on pay-per-view for the UFC to give it away for free?

8. Chris Leben (8): If Leben can beat Munoz in November, he might be able to make the case that he deserves a shot at the middleweight belt in 2012. But considering how easily Silva beat Leben the first time those two fought, a rematch probably wouldn't be pretty for the Crippler.

9. Ronaldo Souza (9): Jacare is the Strikeforce middleweight champion, and one of the best Brazilian jiu jitsu practitioners in the world, but until he moves to the UFC and fights better competition it's hard to move him any higher in the rankings. His next fight, with Luke Rockhold on September 10, shouldn't be much of a challenge.

10. Michael Bisping (10): Bisping will coach The Ultimate Fighter and then fight Jason "Mayhem" Miller in December. A win there would get him close to title contention, although he'd likely need one more victory in 2012 before he'd get a crack at Silva.