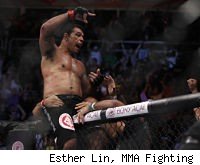 RIO DE JANEIRO -- Antonio Rodrigo Nogueira wanted to fight in front of his countrymen so badly, he admitted to rushing a complex rehab process just to be ready in time for the Rio fight card.

But as he made his way to the cage to take on Brendan Schaub at UFC 134, even the veteran of 40 professional fights was a little overwhelmed by the frenzied reaction from the Brazilian crowd.

"When I was walking to the ring I was super nervous," he admitted with a sheepish smile at the post-fight press conference. "I couldn't really look up to the crowd."

A little over three minutes after the fight had started, when Nogueira's bigger, younger American opponent was lying face first on the mat, that's when the MMA legend finally took a moment to let it all sink in.

"It was only after I had finished the fight that I looked up to the crowd and saw how much noise was being made," he said through an interpreter at the post-fight press conference.

Of course, as he looked up, he might have also seen the celebratory beers flying in from the overjoyed audience members, who apparently loved seeing Nogueira win more than they enjoyed finishing their drinks.

UFC president Dana White said UFC officals "get a little freaked out" when fans start throwing nearly full drinks into the cage, but he also said that the stakes may have been higher on Saturday than even Nogueira fully realized.

"I talked to Nogueira after his last fight and was talking to him about retiring," White said. "And, you know, he was pretty pissed off about that. That's why when I came out and I was talking about Tito [Ortiz] and Tito won that fight, Nogueira was one of the guys who jumped on his side saying, listen, you don't make those [expletive] decisions -- we do. That's not really true, I do make those decisions."

Nogueira might not have wanted to hear it, but after he get knocked out by Cain Velasquez in the first round at UFC 110, White had started to consider whether it might be time for him to hang up the gloves.

But, to his credit, Nogueira went through three surgeries on his hips and knees, built himself back up through an ardous rehab, and came back in surprisingly good condition to out-strike Schaub in front of his home crowd.

It was a long road to get there, and a rocky one at times, according to his wrestling coach, Eric Albarracin.

"I see him in the gym," Albarracin said before the fight. "We have to stretch him a lot before and after. He's got a physical therapist who's always there. She's on call 24/7."

It paid off on Saturday, as Nogueira -- one of the few Brazilian underdogs on the card -- scored a shocking knockout in the opening frame. When asked how far the win might have put him from being in title contention, and how many fights he'd have to win to get back in that conversation, White said it wasn't simply how many, "it's who" Nogueira beats.

Regardless of what he says in his own defense, White insisted, he's not about to sit around and watch Nogueira, or any other fighter, go on too long and risk his own health.

"I'm not going to let this thing be boxing," said White. "When a guy is done, we know he's done. I don't want to make one dollar of that kind of money. "