With Wife in Labor at Home, Forrest Griffin Had Plenty on His Mind at UFC 134 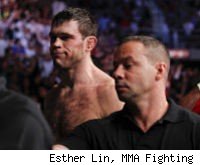 RIO DE JANEIRO -- Forrest Griffin may have lost on Saturday night, but UFC president Dana White had nothing but praise for the former light heavyweight champion, considering the circumstances surrounding the bout.

"His wife is literally getting ready to deliver their baby in Las Vegas right now," White said after thanking Griffin for taking the fight against Mauricio "Shogun" Rua on the UFC 134 card. "We're going to try and get him home as fast as we can."


More Coverage: UFC 134 Results | Latest UFC 134 News
All week long Griffin made no secret of the fact that he would rather have rematched Rua at home in Vegas than in Brazil. It wasn't just the opposition from the Rio crowd, though that was intense. It was all the little things, he explained. The strange food, the exhausting language barrier, the lack of familiar items.

"If I have to do this again, I know I have to bring everything," Griffin said at the post-fight press conference. "Because you're not getting Pepto Bismol here."

But having his wife at home on the verge of giving birth to their daughter only made the situation tougher for Griffin, who was staggered by a hard right hand from Rua in the first round, then finished moments later by a brutal series of hammer fists on the mat.

"The game plan was to get off after he missed, and he missed a couple times and I let him off the hook," said Griffin, who added that he had just learned that his wife was likely going into labor nine days early.

"I have so much respect for him for coming in and taking this fight, being in this situation," White said. "He knew he was going to be in this situation. Like he said, she was supposed to be nine days later. He was just texting with her before we came in here and she thinks she's ready to go. I'm leaving tonight, he's flying home with me tonight."

Coming into the rematch with Rua, who Griffin defeated back in 2007, Griffin was riding a two-fight win streak after victories over Tito Ortiz and Rich Franklin. But he never quite got started in this one, and less than two minutes in he found himself on his back, flailing away as Rua pounded him with hammer fists.

"It's just setting in," he said of the loss. "I think that's a fight where I definitely could have done a lot better. It sucks when you do poorly at your job."

At least he pleased his boss just by stepping up and taking the fight, even if he ended up on the wrong side of it in the end. White insisted Griffin was still a top ten light heavyweight in his opinion, and couldn't praise him enough after the bout.

Then again, if he'd known he was going to get knocked out the same night that his daughter was likely arriving into the world, Griffin said, he might have made a different choice.

"If I had known it was going to work out like this, I would not have taken the fight," Griffin joked, adding that he was "supposed to have nine more days" until the baby's birth.

But then, in birth as in prizefighting, plans can change in a hurry. All anyone can do is try to change with them.