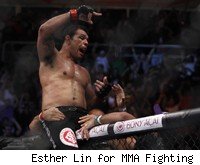 In what may have been the biggest international showcase for the UFC in its history, the promotion handed out some of its biggest bonuses, as well.

Fight night bonus awards in the amount of $100,000 each were given to Antonio Rodrigo Nogueira, Edson Barboza and Ross Pearson after the historic UFC 134 card in Rio de Janeiro. It was the UFC's first trip to Brazil since 1998.

There was no submission in the 12 fights on the card at HSBC Arena in Rio, so UFC president Dana White said at Saturday's post-fight press conference he got to save a little money. Previous six-figure bonuses have been awarded at UFC 129 in Toronto, where fighters got $129,000 bonuses after fights in front of a UFC record of more than 55,000 fans. And at UFC 100, bonus winners also got $100,000 each.


More Coverage: UFC 134 Results | Latest UFC 134 News
Nogueira won Knockout of the Night for his first-round stoppage of surging heavyweight contender Brendan Schaub. Nogueira, fighting for the first time in front of his home country after more than 40 career fights, and just a mile from his gym and three miles from his home, returned after an 18-month layoff to record the upset. Schaub had won four straight fights.

Nogueira had to beat out several other candidates for the KO award, including debuting Brazilian Erick Silva, who stopped fellow countryman Luis Ramos just 40 seconds into the first round. And on the main card, Stanislav Nedkov upset Luiz Cane with a first-round TKO and Shogun Rua beat Forrest Griffin with a first-round finish, as well.

In the main event, Nogueira's Blackhouse teammate Anderson Silva defended his middleweight title for the ninth straight time with a TKO of Yushin Okami. And that, too, could have vied for the knockout bonus.

Barboza and Pearson each won $100,000 for Fight of the Night for a close bout that saw Barboza, from Brazil, win a split decision. Pearson seemed to win much of the standup battle, though Barboza scored a knockdown early in the second round. Barboza improved to 9-0 overall and 3-0 in the UFC. The Fight of the Night bonus was his second straight.