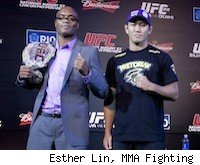 Seconds after Anderson Silva beat Rich Franklin for the second time, "The Spider" was already in celebratory mode when UFC commentator Joe Rogan raised a question that sounded a bit hyperbolic.

Four years later, though, we are still without an answer. Silva has smashed, sliced and squeezed his way through one contender after another to the tune of a UFC-record 13 straight wins. In the process, he has made a legitimate case for himself as the sport's all-time best.

On Saturday, in his home country of Brazil, he faces Yushin Okami, a soft-spoken Japanese fighter with a grinding style somewhat reminiscent of Chael Sonnen, leading many to wonder if Okami might be the man to finally unseat him from the throne.

Okami (26-5) has quietly amassed a strong resume during his nine-year career, going 10-2 in the UFC with wins over Nate Marquardt, Mark Munoz and Mike Swick, among others. But does he have enough firepower to either stop Silva or beat him up on the ground for five rounds?

Either is a tall order for anyone, but let's start with the first. Since joining the UFC five years ago, Okami has stopped only three of his 12 opponents, most recently finishing Lucio Linhares due to doctor stoppage in March 2010.

Okami has always been a positional fighter, both in his standup and on the ground. He is conservative and rarely extends himself or puts himself in bad positions. He is technically sound and exploits opponents' mistakes. In recent fights, he's shown some improvements in his standup game, flashing more complex combinations and punching with more power.

Throughout his UFC career though, he has never been a particularly accurate striker. According to FightMetric, which has tracked 15 of his 31 fights, Okami only lands 39 percent of his strikes, far less than Silva (67 percent). In a game where volume matters, that is a very real concern.

It is an even bigger concern though given the specific opponent he is facing. Silva (30-4) is without question one of the top five strikers in UFC history, a fact born out by the statistics.

According to FightMetric, Silva is the UFC's all-time leader in Significant Strike Accuracy, landing 68.3 percent of those attempts. Because he's so good in that department, he is second all-time in the UFC in knockdowns, with 13. He trails only Chuck Liddell, who had 14. Amazingly, though, Silva has his 13 knockdowns in 13 fights, while Liddell needed 23 fights to notch his 14.

When he's on the defensive side of a strike, Silva is nearly as good. His 1.32 strikes absorbed per minute is just outside the all-time top 10. Silva was at one time No. 1 in this category until his UFC 117 fight against Chael Sonnen, a bout which saw him suffer 89 significant strikes, most coming on the ground.

That is why Okami will have to try to get the fight there. On the ground, Silva loses some of the biggest pieces of his offense, like his Muay Thai plum, his one-punch power, knees, etc.

Though Okami has a reputation as an excellent wrestler, FightMetric marks his takedown accuracy at just 50 percent, a number he will have to improve upon to give Silva problems. Okami is not a traditional takedown artist with double-leg shots from the outside. He often prefers to initiate a clinch and work for a takedown off the cage. Of course, against Silva, there is danger in the clinch, making that a position worth watching.

If he does take the fight down, SIlva never rests from his back. He attacks with triangles and arm bars, he looks for wrist control, and he throws cutting elbows from the bottom. There are plenty of pitfalls for Okami to avoid, and that means at some points, he will have to think defensively despite having top position. He'll have to be judicious in picking his spots and changing up his timing. If you watch the fight-ending sequence Silva used against Sonnen, he appears to bait Sonnen, who throws a series of body shots at the same tempo. Silva times a right hand, then uses his already established wrist control to set up the finishing triangle choke. So he's not just powerful but crafty.

Okami may have his moments if he can get it there, but his chances of finishing Silva are tiny, giving Silva 25 minutes to finish him. Every time they're standing up, Okami will be in danger. He's only been KO'd once, and that was nearly eight years ago, but he's only faced a handful of big punchers since then, let alone one with the speed and accuracy of the current champion. If Okami mixes up his game, firing off the left hand from time to time and keeping Silva guessing, he can make a fight of it. If Silva shuts down his takedowns, it's only a matter of time.

I expect Okami to have some decent moments, as he has against everyone he's faced. He's not a fighter to be embarrassed in short order. But he's not a fighter with the offensive weapons held by the champion, either. At some point, he won't be able to hold Silva down. At some point, Silva will land a fight-changing blow. And when his prey is hurt, there is no one in MMA right now with finer finishing instincts. In front of his home country, in the biggest fight of his career, Silva will want to close the show in style. Silva via late second-round submission.