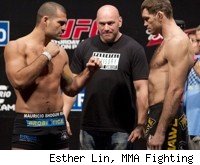 While most of the foreign media is sitting around in hotel rooms this morning trying to calculate the odds that there will be a reliable internet connection at the HSBC Arena on Saturday night, we still have some odds on actual fights to sort through.

Oddsmakers are generally favoring the Brazilians on the UFC 134 card, as was the crowd at Friday's weigh-in, not surprisingly. There's no word on whether oddsmakers believe that the American fighters are "going to die," as the audience insisted, but we do know who they think is going to win.

Now let's sort through the betting lines and see where they might be wrong.

Do we really have to have the conversation about whether Okami is a worthwhile underdog pick for those of you looking to ignore reality and get rich quick? Okay, I guess we do, so let's get it over with. Ask yourself, how does Okami win this? It ain't by KO and it ain't by submission, so that leaves 25 minutes worth of grinding as his best option. Can he keep that up against Silva without getting caught by something, somewhere? Doubtful, but not impossible. Even if he gets his wrestle on like Chael Sonnen did, minus the triangle choke, he'd have to absolutely dominate to win a decision over Silva in Rio. Even then, that call could be a riot-starter.
My pick: Silva. It's best saved for the parlay or ignored altogether, but he has too many tools and Okami has too few.

You want an underdog? Look no further than Griffin. He's big, he's strong, and he already has a win over Rua. I know, we all have to give Rua a pass on that one because of his poor conditioning for the fight, but how many of those passes does he get? Griffin is always in shape, and he always comes ready to take some punishment. Rua has the home crowd advantage, but Griffin is exactly the kind of fighter who has given him trouble in the past. Look for this fight to go all over the place, and the longer it goes, the worse Rua's chances get. Griffin may have preferred to fight this rematch in Las Vegas, but I think he can still win it in Rio.
My pick: Griffin. I'm a little surprised he's going off at nearly 2-1, but I'll take it.

It doesn't please me to write this, but I think Nogueira made a mistake that he's about to pay dearly for. It's not just the choice of opponents, though, yes, Schaub is problematic for him. It's mainly that, by his own admission, he rushed his rehab from surgery in order to fight on this card. I understand why he wants to fight in front of his countrymen before he retires, but does he really want to come back too soon and take a beating in front of his friends and family? Probably not, but I fear that's what he's in for. Even at full power Schaub's size and speed would give him trouble. After eighteen months away and three surgeries, this is a nightmare scenario. I'm afraid something ugly and quick is going to happen here.
My pick: Schaub. Again, it's parlay material, but there's just no way I could justify an underdog bet on Big Nog in this fight.

It's hard for me to envision a worse match-up for Pearson at this point in his career. He's still trying to get back to where he was before the loss to Cole Miller, and now he gets Barboza, who is a terror on the feet, even if most fans don't know enough about him. Pearson has more to lose than gain here, and that's only partially because I think he'll probably lose. Barboza is too dynamic a striker for him, and he has such an array of attacks. Pearson will come chugging forward at him, but he'll most likely run right into a brutal assault. His ability to take it and come back with some of his own in the later rounds is his best hope.
My pick: Barboza. You guessed it: parlay.

On paper, Nedkov's record looks impressive. But if your toughest opponents were Travis Wiuff and Kevin Randleman, it doesn't mean quite as much to be undefeated. Cane has won the easy ones and lost the tough ones so far in his UFC career, but this fight falls somewhere in the middle. Expect Nedkov to be able to push him harder than, say, an Eliot Marshall, but don't expect too much more. Cane should win this, and it feels a little like the UFC made this match-up with that in mind. Not that it's a walk-through, but hey, wouldn't hurt to kick off the pay-per-view with a hard-hitting Brazilian scoring a knockout in front of his home crowd, now would it?
My pick: Cane. It should complete my bunch-of-Brazilians-and-Brendan-Schaub parlay quite nicely, I think.

- Dan Miller (+250) over Rousimar Palhares (-325). You know I have to make some reckless underdog picks, and the undercard is a great place for it. I don't see Palhares getting a heel hook on a guy like Miller, nor do I see him getting the fight to the ground so easily. So what the hell, let's take a chance.

- Spencer Fisher (+170) over Thiago Tavares (-210). As long as I'm picking American underdogs to beat Brazilian favorites, put this one on my tab, too. Tavares is a tad overrated, and Fisher doesn't go away easily.

The 'For Entertainment Purposes Only' Parlay: Silva + Schaub + Barboza + Cane.