Postcards from Rio, Part II: A Visit to the Favela 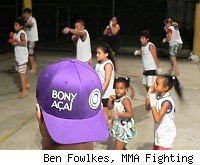 RIO DE JANEIRO -- I don't care what a Fast and the Furious movie tells you, there's no way you could drag a bank safe through the streets of Rio behind a stolen car. Forget the police, the traffic simply wouldn't allow it.

You could inch it along, maybe. You could pull it through an intersection as the city's many motorcyclists swerved at suicidal angles around you. You could behave like every other driver in Rio and treat those dotted lines on the pavement as mere suggestions. But the fact is, you're not going anywhere at any sustained speed.

I came to terms with this during a nighttime ride to Tijuquinha with Brendan Schaub and his entourage. Schaub had been there before, when he was here for a press conference in June, and he promised to bring the kids some gear to train in when he returned for the fight.

As he headed back to fulfill his promise, he knew what to expect. I didn't.

When I heard the word 'favela' associated with Tijuquinha, immediately images of lawless shanty towns filled my mind. When I heard we'd be going at night, I started to question the wisdom of the whole operation. Surely, I reasoned, the UFC wouldn't let anything happen to Schaub two days before the fight. I decided I'd stick close to him. That is, if we ever made it through the traffic.

Fortunately, I had good travel companions. The man in the backseat next to me was Bony Monteiro. You know those Bony Acai hats you see Brazilian fighters wearing? That's him. He owns Bony Acai, which means he's currently doing his best to spread the gospel of the acai berry -- a ubiquitous ingredient in Brazil, used in everything from juice to milkshakes, and also eaten in great heaping bowls that my colleague Ariel Helwani became instantly addicted to when we arrived.

"You'll never get the flu again," Bony told me when I inquired after acai's rumored health benefits. "My kids, they don't even know what the flu is."

Bony, who hails from Belem, in northern Brazil, turned out to be a great resource to answer all my questions about Rio. Was it true that Brazil worked so Rio could play? "They know how to have fun here," he replied. Was it true that cariocas almost never moved out of Rio? "Why would you move?" he said. "Great food, beautiful women, even someone in the favela, if he is angry, he can go to the beach and relax. If they could fix the crime, it would be paradise."

When you're an American headed to Rio, everybody back home warns you about the crime. They'd have you believe that you can't walk out of your hotel without being held up and possibly kidnapped. When I told my dad I was coming here, he started forwarding me news stories of foreigners killed or accosted in other South American countries, as if they were all interchangeable when it came to violent crime.

"In Rio, it's small crime," Bony told me. "They take your watch, take your bag. In Sao Paulo, it's big crime. Organized crime. You understand?"

This was one of Bony's trademark phrases -- you understand? -- and he used it often in conversation, as if afraid I might be just nodding my head and pretending (something I have absolutely done at least a couple times during this trip). The phrase proved to be the perfect calling card to remind you of his patience and his willingness to explain. He also apologized for his English several times, despite the fact the he spoke the language fluently and eloquently. Nothing could have made me feel worse about speaking zero Portuguese.

Bony was along as one of Schaub's main sponsors. Thanks to him, as well as to Ecko and RevGear -- also Schaub sponsors -- the van ahead of us was loaded with bags full of free stuff for the Muay Thai school in the favela. 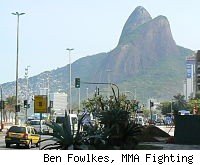 Only once we arrived I saw that this wasn't really a favela. Not like the ones you hear about, anyway. Those, Bony explained to me, were communities carved illegally out of forest land, which is essentially what all Rio would be if not for human development. That aspect of the land is evident everywhere you look. The Rio skyline is dotted with hills and mountains that rise sharply in steep lumps, covered in lush green foliage and, often, the thrown-together dwellings of the favelas.

In America, the neighborhoods usually get more affluent as you head up the hills. In Rio, the hills are often favela territory. As a result of the sudden deforestation that accompanies them, and the steep angle they're built at, mudslides frequently bring them sliding back down. People die. What few possessions they have are lost. Tragedy on an almost regularly scheduled time table.

Then the whole process of building and expansion starts all over again.

And yet, few people in Rio seem inclined to do anything about the favelas. It's an unfortunate situation for everyone, they shrug, but what can you do? It is, in its own way, the most libertarian of all approaches. A very small percentage of Brazil's land is considered protected, so people carve out a life for themselves, pirate some electricity, and soon a village of urban refugees becomes its own community.

"In Brazil, we don't have the problem of racism, like you have," Bony explained to me. "People don't care what color your skin is. They just care about rich or poor."

As affluent, tourist-friendly Ipanema gives way to the outlying neighborhoods on the route to Tijuquinha, the distinction between rich and poor becomes clearer. Dimly lit streets. Handwritten signs advertising business and churches. You can feel the damp heaviness of the forest close around you, and hear the dull beat of the insects in the dark. But as we pull up a back alley and park next to the concrete basketball court where the Tropa Thai classes are held, it's clear that this is no shanty town.

"The people here wouldn't say that they live in a favela," said Dennis Asche of Connection Rio, who helped to link Schaub up with Eduardo Pachu, who's been operating the Tropa Thai classes for over ten years, bringing free martial arts training to the favelas. "It's just a poor community. They don't have much, but they still have a community."

Classes were already in session on the well-lit basketball court as we made our way inside. Around forty kids, from toddlers up through teenagers, were gathered in rows wearing grimy hand wraps. The hand wraps and the white t-shirts from the city of Rio, which has only recently started to get behind the program, were all they had to train in. Once they saw the two huge duffel bags that Schaub and his wrestling coach, Leister Bowling, plopped down on the court, they must have known that was about to change.

First though, it was practice time. They did punch drills. They did push-ups and crunches. I watched as two little girls took turns jumping over one another, the sound of their bare feet thudding against the pavement as they landed. The skill levels ranged from surprisingly good to seriously uncoordinated, but that was hardly the point, Asche explained. 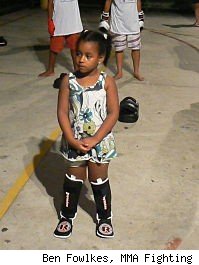 "Instead of selling drugs or getting into something negative, they fight," he said. "They come here and train."

With Schaub's visit they also got a chance to learn that, when they were involved in some positive pursuit like sports, people took notice. People helped. Even if those people came from far away and didn't understand a word of what they were saying.

That part became evident when the gear came out and got passed around. Boxing gloves, shin pads, thai pads, focus mitts -- piles and piles of them, donated by the sponsors. Schaub walked over and handed a pair of boxing gloves to a little boy who couldn't have been older than six or seven. He held them in his hands, looking from one to the other, but apparently having no idea what to do with them.

"Here," Schaub said, holding the glove open for him. "Push your hand down in there."

The kid stared. Schaub mimed the act for him. Nothing.

After a couple days in Rio, I knew how both Schaub and the kid felt. When you don't speak the same language, suddenly we're all just cavemen performing hand gestures that seem perfectly clear to us, but mean nothing to anyone else.

Thankfully, one of the bilingual Brazilians with us came to the rescue. Soon the kid had his hands inside the gloves, and within minutes the court filled with the unmistakable cracking of gloves against pads. Tropa Thai was no longer a basketball court where kids shadow-boxed in old handwraps. Now it was a true training ground. 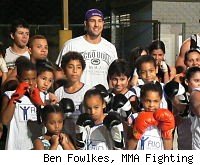 Then it was time for Schaub, this enormous, mysterious foreigner who had showed up one night like Santa Claus with cauliflower ear, bearing free gifts, to get back in his van and go.

He had a fight to think about, after all. A chance to show up at the HSBC Arena and get booed by all the people who either didn't know or didn't care about tonight's charity, who would rise to the their feet at the weigh-ins the following afternoon and shout "vai morrer" -- you're going to die -- as he smiled and flexed in the same Bony Acai cap he's been wearing since he got here (just one more reason Bony loves him).

But then, he knows to expect that. He is fighting a Brazilian hero, and this is a country that holds its heroes close.

"We need more heroes who are not just soccer players," Bony told me on the ride home, again picking our way through the traffic. "Now, it's starting to happen. Fighters are becoming our heroes."

It's happening, but slowly. The same way you get anywhere in this city.