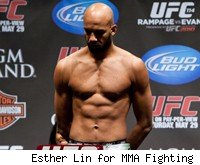 One of the most diverse cards in UFC history got a little more diverse with a light heavyweight bout added to the lineup.

UFC 138, which will take place Nov. 5 in Birmingham, England, will see Cyrille Diabate, of France, fight Anthony Perosh, of Australia. Diabate first announced the fight on his Twitter account on Friday, and the UFC confirmed it later in the day.

UFC 138 which will air on Spike TV on a tape-delay basis, now features fighters from nine different nations. Ten of the 12 fights planned for the card feature fighters from England.

England has not been kind to Diabate (17-7-1, 2-1 UFC). The former pro kickboxer has gone just 3-4 in the country, including his last loss – a rear naked choke submission to Alexander Gustafsson at UFC 120 last October.

But he rebounded for a unanimous decision over Steve Cantwell at UFC on Versus 3 in March to give him seven wins in his last eight fights and 11 of 13. His only other loss the last six years came to Mauricio "Shogun" Rua in Pride in 2006.

Perosh (11-6, 1-3 UFC) won for the first time in the UFC with a rear naked choke of Tom Blackledge in his native Australia in February. That was his first fight after a yearlong layoff following a TKO loss to Mirko "Cro Cop" Filipovic, also in Australia, at UFC 110 in February 2010.

Perosh is in his second stint in the UFC after going 0-2 in the promotion in 2006 with losses to Jeff Monson and Christian Wellisch.

UFC 138 features a main event middleweight fight between Chris Leben and Mark Munoz, as well as Brad Pickett vs. Renan Barao and Paul Taylor vs. Anthony Njokuani. It will be the UFC's first trip to England since UFC 120 last October.