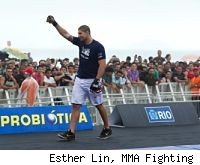 RIO DE JANEIRO -- With his second straight fight against an MMA legend now just a day away, Brendan Schaub is approaching a point of no return. Up until now, he's been quietly moving up the ranks -- an up-and-comer.

If he beats Antonio Rodrigo Nogueira at UFC 134, however, he knows the days of being just another heavyweight contender will likely be at an end. From there, as he put it, "There's only a couple fights left for me, if I do my job on Saturday night."

"They could give me the winner of Cain [Velasquez]-[Junior] dos Santos and I don't think many people would argue about it," said Schaub. "Or you could give me a big name like [Brock] Lesnar."

Then again, there's still that conditional aspect of his statement -- "if I do my job on Saturday night" -- to consider. That's why they have the fights, after all. It's also why you get weeks to prepare for them.

Instead of doing his entire training camp at the Grudge Training Center in Denver, like usual, Schaub traveled from Florida to New Mexico to prepare for Nogueira. He worked with Rashad Evans and the boys at Imperal Athletics in Boca Raton, then went to Albuquerque to see Greg Jackson and Mike Winkeljohn.

The one man he didn't see all that much of this time was trainer Trevor Wittman, who will be missing from Schaub's corner for the first time in Schaub's professional career.

"I've never had a corner make or break the fight, so it's not a big deal," he said. Which is not to say it made no difference to be without Wittman this time around.

Before his fight with Mirko "Cro Cop" Filipovic in March, Wittman had to ban Schaub from the gym temporarily, strictly for his own good. Schaub's always been a gym rat, and even he admitted that he'd worked himself to the point that it was counter-productive.

So how did he handle the impluse to overtrain this time around?

"Worst I've ever done," he grinned. "I had no one to give me an intervention. The last week or so I've had time to rest though, so I feel good."

What many onlookers are wondering is how Nogueira feels heading into this fight. At 35 years old and with three surgeries separating him from his last fight eighteen months ago, Nogueira's physical condition is still a question mark. Schaub seems to choosing to believe that his opponent will be in prime shape, since the fight has high stakes for both men.

Of course, if Schaub wins and the UFC offers him Lesnar rather than a title shot, Schaub would take it in a heart beat, he said.

"Oh yeah. All day. If that's what they want to do, give me Lesnar after this fight, I'm cool with it."

In order to even have that conversation, first he has to get past Nogueira. The Brazilian might bring a battered body into the cage, but he also brings the experience that Schaub still lacks.

And don't tell Big Nog that experience doesn't matter in the fight game. He's earned his. As you can tell just by looking at the man, he also paid for it in full.