Postcards From Rio: Hitting the Ground Running With the UFC in Brazil 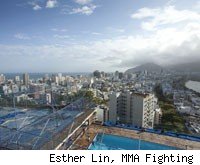 RIO DE JANEIRO -- You don't go to Brazil on a whim. You don't come home one day and say to the girlfriend who insists that you're incapable of spontaneity, 'Pack your bags, we're leaving for Rio this weekend.' Try that, and you might learn that American citizens who touch down on Brazilian soil without a visa get immediately fined and sent home. Then see how you like being spontaneous.

Nah, playa. Brazil requires some planning. You pay your $140 (exactly what the USA charges Brazilian citizens for a visa, the Brazilian consulate website points out, calling theirs a "reciprocity fee" -- in other words, we only do this to you because you do it to us), you turn in your application, your travel itinerary, and proof that you have enough money to get home, then you wait. A week or so later you're standing at the airport, being asked if you're aware of the recommended vaccine for yellow fever.

"Sure," you say, clearly lying. A couple connecting flights and 15 or so hours later, you wake up in Rio de Janeiro, wondering if that nagging cough is going to turn out to be something serious.

If you're like me, you read a guide book. It's helpful, but only to a point. If you want to know the Portuguese phrases for "Please take me to the hospital" or "Please stop flirting with me," they're in there. But certain information is tough to know what to do with, like when it says the tap water is safe to drink "in theory."

Other claims are questionable, but at least somewhat verifiable. For instance, according to the guidebook, Rio residents -- "cariocas," as they're known in Brazil -- love their city so much, they almost never leave for any length of time. A person from somewhere else in Brazil might move to Rio, the guidebook claims, but a carioca will rarely move out of their beloved city.

"That's true," Antonio Pedro Figueroa de Mello, Rio's secretary of tourism, told me when I cornered him at Wednesday's UFC 134 open workouts. "We love this beautiful city and that's why we have cariocas all over the world. You're going to be a carioca, even when you leave."

Granted, here was a man who had good reason to agree with the characterization of Rio as Brazil's greatest city, but as he surveyed the fan response to the workouts at Copacabana beach, he couldn't help but be pleased with the fact that the UFC was bringing this type of attention to his city.

"The UFC was born here with the Gracie family," he said. "Now they come back for Rio. We want to do this to promote the city."

Of course, Rio's repuation among Brazilians isn't all positive. When I told a Brazilian acquaintence that I was headed here, she apologized for not having much to tell me about the city.

As it said in the guide book: Brazil works, so that Rio can play. Don't tell that to de Mello, of course, who was hard at work selling people on Rio during the workouts.

"We work a lot so people can play more," he said with a sheepish grin. "Play better."

Judging by the crowd for the workout, there were at least a couple thousand cariocas who had managed to escape work for a few hours in the middle of the week. They danced. They sang. They launched into a chant or two. The chants and songs, I would learn, are a staple at soccer games among Rio's professional teams.

Another, used by opponents who worry that Flamengo fans might be feeling too good about themselves, retort by singing "Sempre te na Mare" -- you'll always be in Mare. Mare just happens to be one of Rio's most notorious favelas, or slums. It'd be a little like opposing fans responding to a Detroit Lions touchdown by shouting, 'Hey, you're still stuck in Detroit!' As if they need any reminder.

Soccer (sorry, I just can't bring myself to call it football) is never far from the minds of cariocas, even when they're talking MMA. The big stir at Thursday's press conference inside the opulent Copacabana Palace hotel was that Anderson Silva would be making his entrance on Saturday night wearing a Corinthians team jersey. Since Corinthians is a Sao Paulo team, there was the slightest suggestion that the Rio fans who have flocked all around Silva this week might not respond so favorably to this.

Silva smiled his sly grin and pointed out to the eager throng of Brazilian media that, hey, at least this symbolized some kind of unison between Brazil's number one sport and MMA, calling it a potential "new phase" for both MMA and soccer fans.

Plus, Silva said, in fighting he's able to "revert my frustration at not having become a soccer player."

But, as one Brazilian explained to me later, it's more than just a joking matter. Seeing Silva get such a huge response from his countrymen, and seeing him allied with a major soccer team, it all serves to remind Brazilians that with MMA fighters, they now have new role models on the national stage.

"In America, you have many heroes," he explained. "Football players, basketball players, rappers. In Brazil, we only have [soccer] players." 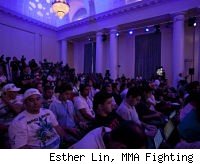 Now, perhaps, Brazilians have woken up to the fact that another of their compatriots is the best in the world at something other than soccer, and he's bringing his talents to Rio for one special night.

A few feet away sat Yushin Okami, glowering into the table top, the headphones on his ears playing an English translation of Silva's words that were just as useless to him as the original Portuguese.

If only there was a Brazilian soccer fan nearby who knew Japanese, he could have put Silva's implied message for Okami into a familiar song: Vou festejar. O seu sofrer...Pode chora.

I'll celebrate your suffering...You can cry.