Fresh Off Surgeries, Antonio Rodrigo Nogueira Has Sharpened His Wrestling 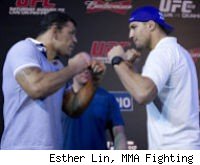 RIO DE JANEIRO -- After eighteen months away from the cage and three surgeries, it's hard not to wonder what kind of shape Antonio Rodrigo Nogueira will be in for UFC 134.

From his hip to his knees, the 35-year-old Brazilian has undergone a complete physical overhaul since his knockout loss to Cain Velasquez, and questions about whether it's left him in better or worse condition for Saturday night's fight with Brendan Schaub seem to follow him wherever he goes.

"I don't think he would take a fight with a guy like me if he wasn't a hundred percent," Schaub said on Thursday. "Especially in front of his home crowd."

One hundred percent might be stretching it a little bit, but Nogueira insists he's better off now than he has been for years.

"The last three years before I had the surgery, we couldn't find out exactly what the problem was," he said. Now, after three surgeries, he feels like he's got a whole new body to work with. "I'm walking better, everything. When I would bend down before, there was a lot of pain."

Still, the recovery from all those procedures didn't come easy. It was ten months of physical therapy, sometimes for up to six hours a day.

"It was a big rehab," Nogueira said. "It was really hard, but I think the rehab also made me in good condition for my core, my back strength. ...It helped me train, I think. I feel good for this fight."

At the same time, Nogueira wanted to fight on the UFC's Rio card so badly that you might wonder whether he rushed his recovery, and you wouldn't be the only one, he admitted.

"I asked the guys, like Anderson Silva, Rafael 'Feijao' [Cavalcante], my sparring partners. I said, guys, I want to fight in Brazil. They said I should take some more time, but I said, one month. Let's train for one month, and then you're going to say I can do it. After one month I was training hard, my wrestling got better, my jiu-jitsu got better. I pulled the guys together and they told me, yeah, you're ready."

Against Schaub, Nogueira's wrestling ability could be the difference between victory and defeat, which is why he brought in former U.S. Olympic coach Eric Albarracin to help him train for this fight.

Albarracin said he could see Nogueira's past wrestling training there under the rubble of his current game in the gym, and it was only a matter of sharpening it up and bringing it out.

"As I started working with him, it came back," Albarracin said. "I could see it. I thought, I don't have to teach him too much. He knows how to wrestle."

So does that mean Albarracin thinks Nogueira could put Schaub on his back with a double-leg? At that, the wrestling coach grinned.

The ability to take the fight to the floor could prove to be vital against the bigger, faster Schaub, who'll come into the fight with a reach advantage and a heavy right hand, and will most likely look to put both to work.

"If I put him down, I've got a chance to use my jiu-jitsu," said Nogueira. "I have more experience than him. For sure, he's physical and he's younger than me, but I've got good endurance."

In the past, it's been Nogueira's ability to keep rising from the grave that's proved to be one of his greatest assets. On Saturday night, we'll get to find out whether he still has one more resurrection left in him.