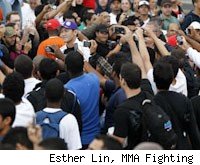 When a Brazilian reporter attempted to ask Yushin Okami whether he thought UFC middleweight champion Anderson Silva deserved to be called the world's best pound-for-pound fighter, that question then had to be translated from Portuguese to English for Okami's trainer/translator -- at this point, 'pound-for-pound' became 'weight-for-weight,' which confused everybody and necessitated a minute or so of word-wrangling between the two translators -- then into Japanese for Okami, who listened intently like a man trying to work out an Algebra question in his head before answering in Japanese, so that it could be translated into English by his trainer and finally into Portuguese by the UFC's translator.

It's like a game of telephone, only the subject always has something to do with grown men beating each other up for money, so at least there's a context you can guess at. From what we heard out of Okami, who was all business in the midst of Wednesday's Brazilian beach party, my guess is he expects to leave Rio as the UFC middleweight champ, even if he won't say how he plans on accomplishing it.

"I understand many people are saying Anderson Silva is the [best] pound-for-pound fighter, but it really doesn't matter to me," Okami said via his translator. "I'm going to beat him, and I'm going to be the middleweight champion."

And how will the fans in Brazil feel about that, if Okami really does ruin their party in the UFC 134 main event on Saturday night? He doesn't know, and, not surprisingly, he doesn't particularly care.

Fighting Silva on neutral territory would be enough to think about. Fighting him in Brazil, where people have been "very warm" to him so far, according to Okami, is something he seems to be trying to put out of his mind entirely.

"I kind of knew that [the UFC] would ask [me] to come to Brazil. I knew it was coming," Okami said, adding later, "I don't think about where I fight; I always think about who I fight. This time I'm going to fight Anderson Silva."

Of course, that part of the equation is something he experienced before, when the two met in Honolulu in 2006, where Okami came away with a victory via disqualification after Silva hit him with an illegal upkick. That was many fights ago for both men, however, and lately Okami has been training in Oregon with Chael Sonnen, who took Silva to the brink last summer before succumbing to a fifth-round submission.

While Okami said that his first meeting with Silva gave him "a lot of lessons," he suggested that his approach in Saturday's title fight would be more than just a facsimile of Sonnen's game plan.

"I and Chael are different fighters, so obviously I cannot just imitate his fighting style," said Okami. "I need to adjust my style to fight Anderson Silva."

On Wednesday it quickly became apparent that the challenger was merely the supporting cast in the eyes of Brazilian fans. Silva was practically the whole show, and Okami was merely a necessary, though forgettable part of the scenery to them. He showed up early, became one of the few fighters to treat the workout portion of the open workouts at least semi-seriously, then answered questions and spent the rest of the time scowling in a corner by himself, waiting to leave.

As part of the pre-fight hype for this event, he's finally gotten his due from UFC president Dana White, who called him the "best fighter to come out of Japan." As far as UFC success alone, that's probably true.

At the same time, it's hard to tell how much of that is genuine appreciation for Okami's skills and how much is a marketing tactic.

Fortunately, Okami doesn't seem too influenced one way or another.

"I'm very glad to hear that coming from Mr. Dana," Okami said of White's praise. "But I'm doing this to be the best in the world, so I'm going to prove it in the next fight."

And how, exactly, does he plan to beat the man who many consider to be the "weight-for-weight" best in the world? There was one question he heard often, and one he certainly seemed to understand, but he wisely chose not to give a straight answer to it.

For now, all Okami is saying is that his strategy will be different from Sonnen's -- and it will work. That's the language of pre-fight certainty that all fighters understand. No translation necessary.