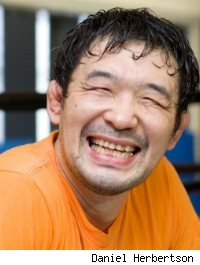 DREAM's first large-scale event for for the year got it's tenth bout on Thursday afternoon as MMA legend Kazushi Sakuraba has signed to fight DREAM newcomer and Nova Uniao submission ace Yan Cabral at DREAM.17 on Sept. 24 at Saitama Super Arena, Tokyo, Japan.

Sakuraba has not competed since his heavily cauliflowered ear was partially torn off in his Dec. 31, 2010 bout with DREAM welterweight champion Marius Zaromskis. The gruesome ear injury continued a run of losses for Sakuraba; the "Gracie Hunter" also falling to the much less experienced Ralek Gracie and suffering a submission loss to Jason "Mayhem" Miller.

Yan Cabral, a Brazilian Jiu-Jitsu black belt who first trained with Carlson Gracie before joining the highly respected Nova Uniao camp, comes into the bout with a perfect 9-0 record with every victory coming by way of submission. Cabral is particularly adept at the arm-triangle choke -- a submission that has brought him victory on four occasions and also gave Kazushi Sakuraba the only submission losses of his career.
DREAM.17 - September 24, 2011 at Saitama Super Arena in Saitama, Japan