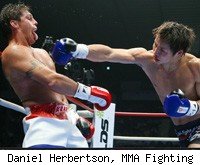 Cross-dressing cos-player and 2010 World MAX Japan GP winner Yuichiro "Jienotsu" Nagashima will also feature on the card in a 78 kg super-fight against Masayuki "Kenmun" Sagara. Nagashima stayed active during K-1's restructuring this year with a stint on the local pro wreslting circuit where he packed on a significant amount of weight. Nagashima last fought a legitimate bout on Dec. 31, 2010 at Dynamite where he knocked out DREAM lightweight champion Shinya Aoki in a mixed rules match.

K-1 promoter Fighting and Entertainment Group have seen significant financial difficulties for the past few years and have been going through a restructuring phase for much of 2011. K-1 have only managed one other event this year, the down-scaled 63kg Japan GP - an event that was broadcast live on YouTube but not on Japanese TV.

Last month it was revealed that the Japanese Trademark Registration Database no longer has FEG as the owner of K-1 and its associated trademarks. With the exception of K-1 Koshien, all K-1 trademark rights have been transferred to real estate company Barbizon. FEG officials are yet to publicly comment on the situation.