Forrest Griffin Has 'Whole New Set of Reasons' for Fighting, but Is It Enough? 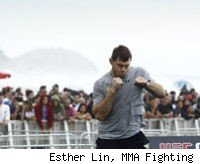 RIO DE JANEIRO -- Forrest Griffin isn't crazy about being in Brazil for UFC 134 this week, and he doesn't see the point in pretending he is.

Why? Take your pick of reasons. Griffin has plenty.

"I can't read the labels on the food. I don't know what's going on. I can't get anybody to cook my sweet potatoes. The scale tells me weird numbers, I don't know what the f--k they are. I've got to do math every time I get on the scale. You guys don't have distilled water. ...Do you want me to keep bitchin'? Because I will."

And yet, despite all the complaining and the utter lack of enthusiasm, there he was at Wednesday's open workouts on the famed Copacabana beach, briefly doing something that sort of resembled a workout. Almost. Well, not really.

He got on the mats, at least. He stretched out, heaving his long limbs around in slow, tortured circles like a father getting ready to play a reluctant game of catch with his son after work, driven entirely by a vague sense of duty. Only for Griffin, the game of catch never came. He stretched, he contorted, he threw a punch or two at the air. He worked his way along the edge of the mat, smiling and waving just enough to please the crowd, then he made his exit.

When the UFC first told him it wanted him to book the rematch for UFC 134 in Brazil, Griffin's thoughts on the matter were pretty simple.

Gradually, he moved through the stages of grief, he explained, arriving finally at acceptance. As in: "When I got off the plane, I accepted I was in Brazil," he said.

The first time Griffin and Rua met was at UFC 76 in 2007. That one took place in Anaheim, and Griffin probably wasn't eager to make even that short trip. If he had it his way, he might only travel from his home to the gym and back. Lately, even that little excursion doesn't sound as if it's quite so fun for Griffin, who admitted that he doesn't have the same kind of fire for the sport that he had several years ago.

"It's different," he said. "Life changes, you know? I do this for a whole new set of reasons now."

Reasons like money. The same reason most people get up and go to work every day. The difference is that, unlike most people, Griffin has to bleed for his cash. And so he does.

But going up against an opponent who's fighting to not only even the score, but also to revitalize his career after getting dominated by Jon Jones in his first attempt at a UFC light heavyweight title defense, you've got to wonder whether the paper chase alone will be enough motivation for Griffin.

Rua's fighting in front of his countrymen, and he's fighting a guy who made him look bad in the later rounds of their first fight. The difference this time, Rua said at Wednesday's open workouts, is that he "trained for four months for this fight. The first time I [fought] with Forrest, I [didn't] train hard, but now I'm ready."

The good news for Griffin is, that's more or less exactly what he's expecting out of Rua.

"I know one thing: when people beat me up I want to fight them again. You train hard and you take it real serious when someone beats you. I had that fear in the back of my head for the last nine weeks, so I did the best I could. I knew he was going to come out hungry and ready. I'm kind of expecting him to just close the distance and come at it and get going."

And at that point, with Rua in classic "Shogun" attack mode and an arena full of rabid Brazilian fans screaming in his ear, will a love of money and a sense of self-preservation be enough to pull Griffin through?

"I don't want to play it up or whatever," Griffin said, "but I was poor once and I'll never be poor again."

It might not be what we're used to hearing from pro fighters, but at least it's sincere.