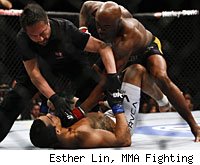 Will Anderson Silva improve to 14-0 in the UFC, or will Yushin Okami pull off one of the biggest upsets in MMA history? Can Shogun Rua avenge his loss to Forrest Griffin, or does Griffin have Rua's number? Does Antonio Rodrigo Nogueira have anything left, or is Brendan Schaub going to knock Big Nog into retirement? Those are the questions I'll answer as I predict the winners at UFC 134.

When: Saturday, the Spike TV preliminaries begin at 8 PM ET and the pay-per-view starts at 9.

Anderson Silva vs. Yushin Okami
Okami is the last man to defeat Silva: On Jan. 20, 2006, the two fought in the first round of a Rumble on the Rock tournament, and Silva was disqualified when he kicked Okami in the head on the ground. To the extent that their first meeting is relevant to their rematch, however, it should give Silva more confidence than it gives Okami: Silva was in control of the bout during all the stand-up exchanges until that unfortunate illegal kick the first time the fight went to the ground.

So what would Okami have to do to pull off the historic upset? The key for Okami would be to fight Silva the way Chael Sonnen fought Silva -- except for the part where Sonnen got caught in a submission in the fifth round. Okami is a powerful grappler who has good takedowns and might just be able to do some of the same things to Silva that Sonnen did.

But Okami's wrestling isn't on the same level as Sonnen's, and even if Okami is able to take Silva down, he's going to have a hard time keeping Silva down. And Okami isn't anywhere near Silva's class as a striker. Is it possible that Okami could grind out a decision and become the new middleweight champion? Yes. Is it likely to happen? No. I think Silva wins by TKO.
Pick: Silva

Maurício Rua vs. Forrest Griffin
The co-main event is also a rematch, of Griffin's upset victory over Rua at UFC 76. Going into that fight, most people thought Rua -- a Pride wrecking machine making his UFC debut -- would run through Griffin, who was very popular but known mostly for his stint on The Ultimate Fighter. Instead it was Griffin who finished Rua with a rear-naked choke in the third round.

Rua is again a big favorite this time around, as most people seem to think that Rua is healthier now than he was then, and that Griffin, at age 32, isn't quite the fighter he once was. But I'm not convinced. I think Griffin's size and strength is going to be tough for Rua to handle on the ground, and Griffin's use of leg kicks will be very important to slowing Rua down. I see Griffin winning a hard-fought decision.
Pick: Griffin

Brendan Schaub vs. Antônio Rodrigo Nogueira
Nogueira has had a long and honorable MMA career spanning more than a decade, and he's finally fighting in his native Brazil for the first time. So it would be great to see him put on a phenomenal performance.

Unfortunately, there's not much reason to believe Nogueira has any phenomenal performances left in him. He's been inactive for a year and a half, so ring rust may be a problem, and in his last fight he was knocked cold by Cain Velasquez. Nogueira was once legendary for his chin, but that knockout loss to Velasquez -- as well as Nogueira's TKO loss to Frank Mir at UFC 92 -- has me thinking Schaub could put him to sleep.

Schaub is a former football player who only started fighting three years ago, so he's got nothing close to the experience of Nogueira, but he's strong as a bull and hits like a Mack truck. I expect Schaub to handle Nogueira, and as a longtime Minotauro fan, I just hope it's not an ugly loss.
Pick: Schaub

Ross Pearson vs. Edson Barboza
Pearson won Season 9 of The Ultimate Fighter and has shown since then a real propensity for landing effective punches and putting on exciting fights. But Barboza is a different kind of striker, a guy whose leg kicks are legendary and who is capable of finishing opponents with his hands, his elbows or his knees. The 25-year-old Barboza is 8-0 and a rising star in the lightweight division, and he should earn his biggest victory to date against Pearson.
Pick: Barboza

Luiz Cane vs. Stanislav Nedkov
Win or lose, Cane's fights usually end quickly: He's been to the second round just twice in his 14-fight career. The 11-0 Nedkov is also a finisher, with five wins by technical knockout and four by submission, so don't expect this fight to go the distance. I think Cane will welcome Nedkov to the UFC with a TKO win.
Pick: Cane