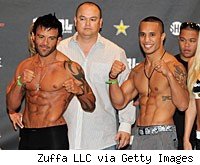 The Strikeforce Challengers 18 event on Aug. 12 at the Palms Casino Resort in Las Vegas sold a total of 549 tickets for a gate of $53,670, the Nevada athletic commission revealed Wednesday.

A total of 1,956 tickets were issued, with 1,341 tickets papered and 66 left unsold. According to reported salaries, fighters earned $92,000 in purses and win bonuses on the 10-bout card.

However, both shows drew far less than the The Ultimate Fighter Finale cards which also call the Pearl at the Palms its home base. At the TUF 13 Finale in June, the UFC pulled in 1,494 paid for a live gate of $429,000.

Strikeforce Challengers 18 was highlighted by Joe Duarte outpointing Jorge Gurgel in the main event and Ronda Rousey making her Strikeforce debut with an armbar win in 25 seconds.