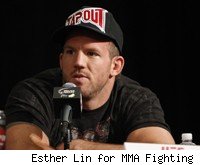 A pair of light heavyweights badly in need of a win will meet at UFC 139 in November.

Ryan Bader and Jason Brilz, each with two-fight losing streaks for the first time in their careers, have agreed to a fight on the UFC's Nov. 19 pay-per-view in San Jose, Calif. The promotion announced the fight Tuesday night on its official website.

Bader (12-2, 5-2 UFC) started his UFC career 5-0, and his MMA career 12-0, including the title of Season 8 champion of "The Ultimate Fighter." The two-time All-American wrestler at Arizona State then began a methodical climb up the light heavyweight rankings that culminated with a unanimous decision win over Antonio Rogerio Nogueira in the co-main event of UFC 119 last September.

The win over Nogueira got Bader a fight against Jon Jones at UFC 126. But Jones was on his rapid ascension to the top of the 205-pound heap and submitted Bader in the second round. Jones got a quick title shot against Mauricio "Shogun" Rua, which he won in dominating fashion. Bader had to regroup.

But against Tito Ortiz at UFC 132 last month, Bader fell victim to what has been the year's biggest upset. Ortiz dropped Bader with a short right hand early in the first round, then moved in for a guillotine choke that forced Bader to tap. The win by Ortiz was his first since October 2006, saved his job in the UFC and made Bader the answer to an MMA trivia question, albeit on the wrong end.

Brilz (18-4-1, 3-3 UFC) saw his two-fight skid begin with a controversial split decision loss to Nogueira at UFC 114 in May 2010. That bout, which won Fight of the Night, had most in attendance, and many scoring the fight live, believing Brilz was the victim of bad judging.

After nearly a year off due to injury, Brilz returned at UFC 129 in Toronto to face Vladimir Matyushenko. He never had a chance to get started – Matyushenko knocked him out just 20 seconds into the first round.

Though he may get some leeway for the Nogueira fight, a loss to Bader would mean the former University of Nebraska-Omaha wrestler, and current assistant coach, would have just one win since March 2009.

UFC 139, though not yet officially announced by the promotion, will be its debut in San Jose, the former home base of one-time rival Strikeforce. The pay-per-view is expected to take place at the HP Pavilion.

Aside from the heavyweight championship in the main event, UFC 139 will also feature a bantamweight contenders bout between former champions Brian Bowles and Urijah Faber, a welterweight bout between Martin Kampmann and Rick Story and a light heavyweight bout between Stephan Bonnar and Kyle Kingsbury. In addition, though he does not yet have an opponent named, Josh Koscheck is expected to make his return at the event, and is planning on a move from welterweight to middleweight for the first time since his appearance on Season 1 of "The Ultimate Fighter."