Nine Ways of Looking at UFC 134 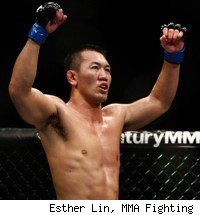 UFC 134 in Brazil promises to be memorable for a variety of reasons. Here are just a few of them, in no particular order or importance.

I. "Yushin Okami is not only the biggest middleweight I've ever fought," Mike Swick told me once, "He might be the biggest middleweight I've ever seen." In fact, it was a decision loss to Okami that convinced Swick he was in the wrong weight class, since he just could compete with Okami's size and strength. It may not always come across on TV, but Okami isn't just a good wrestler -- he's a powerhouse. He's the kind of fighter who can, if he has to, take you down and lay on you until the judges declare him the winner. For a champion whose biggest weakness is his takedown defense, that's a legitimate problem.

II. But how much time will Okami get to work on the ground, anyway? Let's be honest here: if Okami tries to go all human blanket on Silva for five full rounds, the Brazilian crowd is going to let him have it. No referee is going to admit it, but a continuous stream of boos has hastened more than one ref stand-up in MMA history. It shouldn't, of course. The third man in the cage should remain oblivious to everything outside of it. That's easier said than done, however. Sure, Bob Dylan had the fortitude to get booed every night when he went electric, but does Mario Yamasaki have that same iron will that Dylan had? Could Herb Dean power through "Like a Rolling Stone" even as the hate poured down on him? I'm not so sure. Let Okami get a couple rounds of takedowns and ground control under his belt, and we may find out.

III. There are two ways to beat Mauricio "Shogun" Rua. One is to be a vastly superior fighter, as Jon Jones was. The other is to deal with his bull rush in the early going, absorbing and/or deflecting his aggression as best you can, then turn it up in the later rounds when he's burned through his jetpacks. The latter is what Forrest Griffin did the first time they met, whether intentionally or unintentionally, and it's his best chance in the rematch. He's bigger, stronger, and if he can make Rua carry some of that weight and wear himself out, that's when Griffin can put him away. Skill-for-skill, Rua is probably the more gifted fighter, but Griffin has a way of just hanging around. Some nights, that's enough.

IV. Antonio Rodrigo Nogueira hasn't fought in a year and a half. During that time, he also had knee and hip surgery. Now he's coming back to fight Brendan Schaub, who's looking to continue the legend-slaying tour he began with a knockout of Mirko "Cro Cop" Filipovic in March. Anybody else seeing disaster in the works for Big Nog? He's the kind of fighter who seems to have crammed three careers worth of action into the last decade, and now he's not looking quite so spry or resilient anymore. Schaub is a big, young, hungry heavyweight. Unless Nogueira can pull off a hail mary submission off his back -- possibly after being knocked there by a Schaub right hand -- it's hard to see how he wins this.

V. If you've been looking for a chance to get to know more Brazilian fighters, you're in luck. In all, fourteen Brazilians are competing on this card, ranging from ones you might know (ever hear of this Anderson Silva guy?) to ones you might not (Erick Silva and Luis Ramos, for instance, who will be debuting in the UFC against one another). In other words, even though he'll be there to corner his buddy Okami, this might not be the night for Chael Sonnen to regale the boys backstage with his particular brand of cultural insult comedy.

VI. Once more unto the breach for Ross Pearson. The British lightweight was on his way up the ladder until that surprising loss to Cole Miller, then he bounced back with a decision over Spencer Fisher. The time for gradual build-ups is apparently over, because now he gets the Brazilian buzzsaw, Edson Barboza, who's been known to make audience members cry just from witnessing his brutal leg kicks in person. Okay, so that last part is just a rumor I'm trying to start, but the point is it could be true. Pearson has a seriously tough night ahead of him against Barboza. Even if he pulls off the upset, chances are he'll be hobbling through the airport in the morning.

VII. How good is Dan Miller's leglock defense? We're about to find out. Miller's never been submitted in his MMA career, but he's also never fought an enemy of knee ligaments everywhere quite like Rousimar Palhares. "Toquinho" has won three of his last four with submissions below the waist. As long as he can keep his head in the game and avoid another costly mental lapse like the one he suffered against Nate Marquardt, he has the potential to be a real problem for Miller, who could really use a win right about now.

VIII. Pity poor Ian Loveland and Yves Jabouin. Theirs is the only fight on the card that doesn't feature at least one Brazilian. Will that make it a novelty for the Rio fans, or just the perfect moment to visit the concessions stand? It is on the prelims, and early on in the night, too. If the crowd is operating on Brazilian time, they may miss it entirely.

IX. There's just no way Anderson Silva will be anything but one hundred percent serious while fighting in his home country, right? I mean, it's one thing to screw around in Abu Dhabi, but Rio? No chance he decides to samba for five rounds here. Not in front of family and friends, not to mention his big time corporate sponsors and his reactionary boss. Not on your life, right? Right?