Following UFC on Versus 5 Loss, Jason Reinhardt Released From UFC 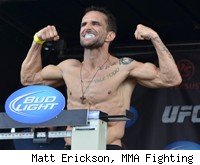 Jason Reinhardt hoped to reinvigorate himself by dropping down to bantamweight for his last fight.

He may have done that, but his loss to Edwin Figueroa at UFC on Versus 5 10 days ago was enough for the promotion to hand him his walking papers. Sources close to Reinhardt told MMA Fighting on Tuesday that Reinhardt has been released by the UFC.

Reinhardt, who was the oldest active fighter in the UFC, was in his second stint with the promotion. All three of his career losses came in UFC fights.

Reinhardt (20-3, 0-3 UFC) first fought in the UFC at UFC 78 in November 2007. After starting his career 18-0 fighting mostly in his native Illinois, as well as Iowa and Indiana, Reinhardt was picked up by the UFC for a fight against Joe Lauzon. Lauzon submitted him just 1:14 into the first round.

After picking up two more wins on regional shows, Reinhardt again got the call from Zuffa, this time to fight Tiequan Zhang at WEC 51 in a lightweight fight on short notice. But he had to withdraw from the bout when he failed his eye exam.

Reinhardt got his shot at Zhang several months later at UFC 127 in February – with both he and Zhang dropping to featherweight for the fight. Zhang submitted him 48 seconds into the first round.

But despite another quick UFC loss, Reinhardt got another shot – and reportedly at the urging of matchmaker Joe Silva, dropped to bantamweight. Against Figueroa at UFC on Versus 5 earlier this month, Reinhardt heard the boo-birds when he circled around the outside of the cage for more than a minute without engaging, then taunted Figueroa to engage him and was seen telling him, "I can do this all night." Once Figueroa caught him, Reinhardt needed to be saved by the bell in the first round. And in the second round, Figueroa ended things quickly with a TKO.

In Reinhardt's three UFC fights, he competed in three weight classes for a total of just 7:52 in the Octagon. Reinhardt's fight against Figueroa was just the third time in his career he had seen the second round. Eighteen of his 20 wins have been first-round stoppages, and he has 16 career submission wins. But his success outside the UFC – as what critics have called a can crusher – didn't translate to success in the UFC.

Reinhardt recently began training in Las Vegas with Wanderlei Silva's Wand Fight Team, and he has said his plan is to move to Las Vegas permanently to continue training.

On his Facebook page, Reinhardt said he plans on getting back to the UFC: "I'm staying positive, recovering, and I will have my (butt) back in the gym ASAP," Reinhardt said. "I love the UFC and how they treated me ... All I have to do is win a couple fights in another organization and I will be back."