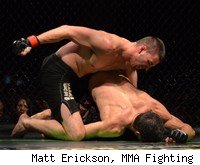 A pair of veteran fighters – both with UFC experience and with more than 80 professional fights between them – are returning to the promotion and will face each other this fall at UFC on Versus 6.

Verbal agreements are in place for welterweights Josh Neer and Keith Wisniewski (pictured) to meet on Oct. 1 in Washington, D.C. Sources close to the fight confirmed the matchup to MMA Fighting on Tuesday morning, which was first reported by MMA Junkie. Neer and Wisniewski have 83 pro fights between them – 42 for Neer, 41 for Wisniewski – yet both are under 30 years old.

UFC on Versus 6 is the promotion's debut in the nation's capital city and will be the company's final live show on the cable station in its current four-fight deal. The card will be headlined by a bantamweight title fight between champion Dominick Cruz and Demetrious Johnson.

Neer (31-10-1, 4-6 UFC) returns to the big show for the first time since a decision loss to Gleison Tibau at UFC 104. Neer has gone on a four-fight win streak since being choked out by Bellator lightweight champion Eddie Alvarez 15 months ago, and all four wins have been stoppages.

On Saturday, Neer stopped Blas Avena with a first-round TKO at a Superior Cage Combat show in Las Vegas. And in June, he defended his Shark Fights interim welterweight belt against Jesse Juarez. Since being cut by the UFC, Neer has won six of seven fights with just the Alvarez loss, at Bellator 17, a blemish on his record.

Neer first fought in the UFC on the first Fight Night card in August 2005, losing by submission to Drew Fickett. He returned at Fight Night 3 and submitted Melvin Guillard, currently one of the UFC's top lightweights, and then beat Joe Stevenson at Fight Night 4. Losses to Josh Burkman and Nick Diaz, at UFC 61 and 62, sent him packing. But he returned at Fight Night 13 and stayed put in the UFC for five straight bouts, going 2-3 with wins over Din Thomas and Mac Danzig, and decision losses to Nate Diaz, Kurt Pellegrino and Tibau. His fights with Nate Diaz and Danzig both were Fight of the Night winners.

Wisniewski (28-12-1, 0-1 UFC) is in the midst of a six-fight winning streak that includes a submission of UFC veteran Pete Spratt and a dominant decision win over UFC vet Chris Wilson in April. Wisniewski's lone UFC fight came against Nick Thompson at UFC 56, a unanimous decision loss.

After his loss to Thompson, Wisniewski signed with Bodog Fight and lost a split decision to Jorge Masvidal. He then hooked up with the IFL and lost to Rory Markham. That loss was followed by a pair of split decision setbacks. In fact, the way Wisniewski sees it, his six-fight winning streak could just as easily be 10.

"There were three split decisions and one draw that was going to go into overtime, and I couldn't continue," Wisniewski told MMA Fighting in April. "Two of those, I've gone back and watched and I'm certain that I won. Two of them, maybe I lost but they could've gone my way – they were really close decisions."

Wisniewski, whose most well-known fight, perhaps, was when Shinya Aoki snapped his elbow at a Shooto event in Japan in 2005, runs the Duneland Vale Tudo gym in Northwest Indiana that is the home to UFC fighters Eddie Wineland and Darren Elkins. But it was likely his win over Wilson in April that put him back on the UFC's radar screen – like he hoped it would. Wilson returned after a yearlong layoff, though training with the Nogueira brothers in Brazil, and was dominated by Wisniewski – including a 30-26 – at Hoosier Fight Club 7 in April.

UFC on Versus 6 takes place Oct. 1 at the Verizon Center in Washington, D.C. It will be the promotion's final live event on the Versus cable channel in a four-fight deal in 2011. The UFC will move its broadcast home to the Fox networks in 2012, including FX and Fuel TV.