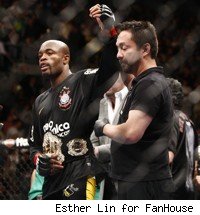 Ah, Brazil. A single mention of the country conjures up images of beaches, partying, and thongs. But Dennis Hallman jokes aside, it also reminds many of fighting. As the birthplace of mixed martial arts, Brazil has been an all too infrequent stop on the UFC's traveling road show.

Saturday night's UFC 134 is the promotion's first time back home in nearly 13 years, but they're bringing their big guns to Rio, including the longest-reigning champion in UFC history, middleweight kingpin Anderson Silva.

To kick off fight week, Ben Fowlkes and I take a look at some of this weekend's pressing storylines in our UFC 134 roundtable.

1. Be honest: do you give Yushin Okami any chance against Anderson Silva? How, specifically, do you see this fight ending?

Fowlkes: I give Okami somewhere between 'almost zero' and 'very little' chance. On paper, he's a big, powerful middleweight who can pursue the Chael Sonnen strategy of takedowns and perfunctory (though not especially damaging) ground-and-pound. But once they get in the cage, I don't see him being able to keep that up for very long before Silva stings him with something. I'd like his chances a lot better if the fight was scheduled for three rounds rather than five. I'd like his chances even better if every round didn't start on the feet. But alas.

I think Silva rocks Okami with a knee from the clinch in the third round and finishes with strikes on the ground.
-- Mike ChiappettaI think Okami roughs Silva up in the first round, and maybe even the second. Somewhere in round three, however, Silva's going to get fed up. That's when he'll crush poor Okami with a combo move straight out of a video game, and of course Steven Seagal will later take credit for the whole thing.

Will the champ then be carried through the streets of Rio by an adoring crowd, thereby scuttling the hopes for a decent post-fight press conference and leaving us foreign reporters no choice but to join the mob, caipirinhas in hand? Maybe. Hopefully.

Chiappetta: I think he has a legitimate chance to pull the upset. Call me crazy, but I think his takedowns are good enough to put Silva's back to the mat, and his top control is strong enough to keep him there and stay out of trouble. Let's remember that Okami's never been submitted in his career.

But I do think his chances of winning are solely dependent on taking Silva down and making it a grind. Even though Okami hasn't been stopped on strikes since 2003, his striking game isn't advanced enough to hang with Silva for 25 minutes. On the ground, it's a different story. The trick is that Okami has to commit just enough to his striking to put doubt in Silva's mind about what he's doing, then initiate the clinch and put him on the mat before getting in trouble. That's a tough proposition to pull off once, let alone five times. I think Silva rocks Okami with a knee from the clinch in the third round and finishes with strikes on the ground.

More Coverage: UFC 134 Fight Card | UFC 134 Results
2. Every fight on the main card features a Brazilian taking on a non-Brazilian. Since this is the UFC's much publicized return to Brazil for the first time since 1998, how much of a difference do you think the passionate hometown fans can possibly make?

Chiappetta: Never discount a real hometown advantage and the emotion that comes with it. For evidence, let's think back just a few months to UFC 129, when 55,000 rabid fans -- mostly Canadians -- filled the Rogers Centre in Toronto. Ten Canadians fought, going 6-4, headlined by Georges St-Pierre's win over Jake Shields.

But even the locals that lost had some inspired moments. Think back to Mark Hominick's fifth-round rally against Jose Aldo. There's definitely extra inspiration when the fans mobilize behind you. Brazilian fans are known for their passion, and they'll be behind their guys with fire. Crowd energy can also work the opposite way, as the guy on enemy territory might find it hard to find his focus in the eye of a storm.

In the end, talent does usually win as emotion can only take you so far. But every now and then, a little push from the crowd makes a difference.

Fowlkes: In my experience, where hometown advantage makes the biggest difference is in fights that go the distance. Face it, many MMA judges are half-blind to begin with. If the crowd goes wild whenever a Brazilian lands a blow and sits on its hands when his opponent lands three, that could easily turn a borderline incompetent judge into a downright senile one. If I'm one of the Americans facing a Brazilian in Rio, I'm doing my best to make sure the scorecards don't come into play.

In my experience, where hometown advantage makes the biggest difference is in fights that go the distance.
-- Ben Fowlkes Other than that, it's all the little stuff on fight week that irks the foreigner. When you don't speak the language, any foray outside your hotel room can feel exhausting. You can't get the food you usually eat, can't get around as easily. Plus you've got a nice little 11- or 12-hour flight to give other people's germs a chance to hitch a ride on your already weakened immune system, and all just a few days before you begin your weight cut. What could go wrong?

But you know something? The Brazilians have done it long enough. They've gone through the headache of the visa application and the annoyance of communicating entirely through translators and/or hand gestures. They've played on our turf, in front of our crowds. Don't they deserve to kick back at home for one event and show the locals what they've been up to in America all this time?

3. Excluding the main event, who on this card has the best chance to fight for a title? Assuming that person wins in Rio, how far from the shot do you think they are?

Fowlkes: Forrest Griffin probably has the best shot of earning a title shot, but I think Brendan Schaub is more likely to actually get one first. Sadly for FoGriff, that's just how the divisions stack up right now. At light heavyweight there are more challengers "in the mix," as Dana White would say, and the line forms behind Rashad Evans. At heavyweight there are fewer overall contenders available, especially with Brock Lesnar still out, so Schaub might get the nod just out of a lack of other options.

That said, Schaub will first need to beat someone closer to his prime. All these legends of the sport look impressive on the old resume, but we all know he's catching these guys well past their expiration dates. If he beats Nogueira and then crushes someone his own age before the year is out, Schaub could conceivably get a shot at the winner of the Cain Velasquez-Junior dos Santos fight by next spring. Whether he's actually ready for that fight, well, that's a question for another roundtable.

Chiappetta: I agree that Schaub probably has the clearest path to the title, so I'll audible a bit and answer who has the best chance not just to fight for the title, but win it. For me, it's Edson Barboza.

The 25-year-old has an advanced striking game and is reportedly diligent in improving his wrestling and jiu-jitsu. As he stands now, he's already a next-level prospect that should be on everyone's radar as a future top 5 lightweight. If he continues to progress, he has the tools to be a champion. But at this stage, he's still a good two years away.

Chiappetta: I'm going to say Griffin, for a couple of reasons. First of all, he's already beaten Rua once before, so we know he can do it. Sure, the first time around Rua was fighting injured and ran out of gas, but Griffin's already road-mapped the route to victory against him. Second, Griffin has a built-in size advantage and a ground game that can give Rua fits if he's able to take it down again. Griffin fights smart, and if Rua isn't 100 percent, he can make the rematch look like a carbon copy of the first fight between them.

Nogueira is certainly capable of beating Schaub, but it's hard to pick him after an 18-month layoff. Fighting is about rhythm and timing, and months away affect that more than anything. Schaub has also proven himself to be a big puncher, and Nogueira's reduced ability to take a big shot works against him, too.

Fowlkes: Griffin all the way. I give Nogueira very little chance against Schaub, mostly for the reasons you already outlined. He may be 35, but with the career he's had he's got a body that seems like it's pushing 50. You don't take that much time off and have that much of a physical overhaul at his age without paying a price for it. For Big Nog, that price is going to be decreased mobility and possibly weakened cardio, neither of which he can afford against a young whipper-snapper like Schaub.

Griffin, on the other hand, really shouldn't be such an underdog. As you point out, he's bigger than Rua. More durable, too. If you want to beat "Shogun" (and you aren't Jon Jones), you need to be able to weather the storm early on. Taking a beating and still coming hard is Griffin's whole deal, so I wouldn't rule him out by any means. At least, as long as he doesn't let it go to the judges.