Phil Baroni Insists He Has More Left in Tank 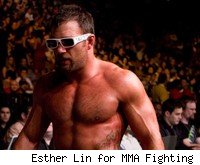 Heading into his 28th pro fight, and just one win over the .500 mark, Phil Baroni admits he's given serious thought to hanging up the gloves.

But the famed "New York Bad Ass" said just when he thinks he's ready to be out of the sport, it pulls him back in.

Baroni told host Ariel Helwani on Monday's edition of "The MMA Hour" that ahead of his fight against Yoshiyuki Yoshida at One FC next month in Singapore, he's excited again.

"Every time I start camp and I'm out of shape, I think I'm done," Baroni said. "I want to get the hell out of here. Once I start getting in shape and my body starts feeling good, I want to do it as long as I can. When you see guys like (Dan) Henderson – it's motivating to see guys at 40 looking as good as he looks."

Baroni (14-13) returned to the UFC in late 2009 for the first time since UFC 51 in February 2005. He lost to Amir Sadollah in his first fight back. And after some time at Tiger Muay Thai in Thailand, and a decision to return to middleweight, he booked a fight with Brad Tavares at UFC 125 in January. But Taveres landed a big knee in the first round and finished Baroni with strikes, giving the New Yorker a three-fight skid and an exit from the UFC with a 13-13 career record.

It didn't take Baroni long to get back on the horse, though. At a March Titan FC show in Kansas City, Baroni grinded out a decision win over Nick Nolte – a fight he said was hard on him because of injuries.

"Going into that fight, I was a little beat up," Baroni said. "The fight was rough. I had some broken ribs, and I just had to get through that fight. it wasn't so much a great win. It was a relief to get a W. I didn't win that fight with an exclamation point. It wasn't a good fight. No one said, 'Let's sign this guy up.'"

But though Baroni said he had considered retirement, it might have been an easier choice had he lost to Nolte – especially because no major promotion would have been clamoring to put him on a card.

"You're done when you give up," Baroni said. "I would've been a really bad position for me (if I lost). I was really hurting in there, but I did what I had to do to get the win."

Baroni has never put together an MMA winning streak longer than three fights, but he's had three losing streaks of three fights or more. He won his UFC debut at UFC 30 against Curtis Stout, then lost to Matt Lindland at UFC 34. But after consecutive UFC wins over Amar Suloev and Dave Menne, he dropped four straight in the promotion to Lindland, Evan Tanner twice and Pete Sell, Baroni was cut from the promotion.

Baroni regrouped in Pride, going 4-2 in Japan before returning to the United States to fight Frank Shamrock for the Strikeforce middleweight belt. But a he was choked out by Shamrock, setting off a three-fight skid.

With a return to Asia for the Yoshida fight, Baroni said his first fight outside the U.S. in more than three years, as well as One FC's use of a combination of unified MMA and Pride rules, bodes well for him.

"I'm a road warrior – I'm excited to go overseas and fight," Baroni said. "There's a big diff between Singapore and Japan, but I wanted to fight in the show. I'm in no man's land right now (in my career). Pride rules ... knees on the ground ... (no holds barred) – I think it's good. It's my style."

Baroni has regrouped with the American Kickboxing Academy team in San Jose, Calif., for the bulk of his training for Yoshida. He said AKA's style of hard sparring three times a week helps him be prepared for a fighter the likes of Yoshida (12-6), who also recently snapped a three-fight skid with a win in France after going a combined 2-4 in the UFC and Bellator between 2008-2010.

"His deal in UFC, he choked out War Machine (Jon Koppenhaver), which is no easy task," Baroni said. "He got knocked out by (Josh) Koscheck, and Koscheck is top five in the world. He's going to come to fight and try to prove everyone wrong, and that's going to be his demise – I'm going to knock him out."

Baroni and Yoshida fight at One FC: Champion vs. Champion on Sept. 3.