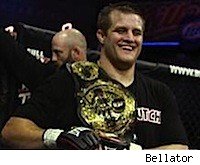 Judging from the sounds of the crowd watching him fight last Saturday night at Mohegan Sun Arena in Connecticut, Cole Konrad didn't overly impress most in his win over Paul Buentello at Bellator 48. Konrad earned a unanimous decision largely by out-pointing Buentello with a strong jab, firing off an occasional right cross and kicking from distance. It was not a technical masterpiece, but it did represent a major step forward for a fighter who has been criticized for being overly reliant on his wrestling.

One person who has had a front row seat to watch Konrad's evolution is Pat Barry, the UFC heavyweight who has joined Team Deathclutch in a mutually beneficial arrangement that sees him lending his striking expertise to the wrestling-heavy camp.

According to Barry, when Konrad's belief in himself parallels his new standup skills, he may become not just one of the best heavyweights in the world, but the very best.

"He's like 6-foot-4, 300 pounds, and has cat-like balance," Barry told MMA Fighting. "He can shift all of his weight and put it anywhere. It's scary. When he develops the confidence in his striking the way that I know how good it is, that's the heavyweight champion of the world right there, in any organization."

That might sound like a bit of a stretch, but he says his words with typical Barry conviction. And the more he talks, the more obvious it is that he is quite sure of what he is saying.

Given Barry's history in the fight game as both a kickboxer and mixed martial artist, that's some serious praise. It's also pretty bold of him to say that about a non-UFC fighter, even if it is someone in his camp.

For his part, the unbeaten Konrad (8-0) took the negative fan reaction well, even though it was ultimately Buentello's hesitance to engage that slowed the fight down. Even though he's already the Bellator heavyweight champion, Konrad took it as another learning experience.

"Obviously the fans like to see knockouts, they like to see submissions, things like that, and I guess I haven't been putting that out there," Konrad said. "I am young in my career. I'm learning a lot out there. Knockouts are coming and submissions are are coming."

During the fight, Buentello's corner seemed mystified at his performance as he seemed frozen at times, perhaps waiting for a Konrad takedown try that didn't come until well into the third and final round. Buentello finally let his hands go a bit in the third, but it was too little, too late.

Barry said that given Konrad's reputation as a wrestler, he could understand Buentello's indecision, and it's a trend he expects to continue as Konrad continues to evolve his striking and give his opponents more things to consider. In Barry's estimation, once Konrad begins to really feel confident and mix things up, it's a wrap for the rest of the world's heavyweights.

"Every heavyweight who might face him is now totally confused and doesn't have a game plan or know what to do next time they step across from Cole Konrad," he said. "You've got a guy who is known for throwing one punch, tackling you to the ground, out-wrestling you, smothering you and killing you on the ground. Whether it's submission or beating you down. This guy stood for two-and-a-half rounds striking with a striker without making one takedown attempt whatsoever. He won a striking war against a striker. Now they don't know what to do.

"All he's got to do is believe in it," Barry continued. "He hits like a monster. That dude is 300 pounds of fist flying at your face. That dude is going to kill you."