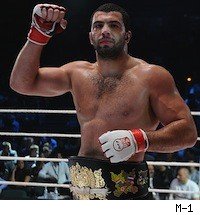 M-1's return to Showtime television is set for October 14, and will include a trio of title fights, the promotion's global director of operations Evgeni Kogan told MMA Fighting on Tuesday.

The night's main event will feature the return of M-1's heavyweight champion Guram Gugenishvili, who will take on Kenny Garner in a rematch of their October 2010 title fight. Gugenishvili had been expected to fight on M-1's July card but suffered a left wrist injury prior to the bout and withdrew.

The unbeaten Gugenishvili is 11-0 so far in his pro career, with 10 of his wins coming via submission. Garner was a secod-round guillotine choke victim in round two of their previous encounter, making him only the second man to make it out of the first round against him.

Since losing that fight, Garner has won two straight, improving to 7-3.

In a light-heavyweight championship match, reigning king Vinny Magalhaes will face Mikhail Zayats. Magalhaes, an Ultimate Fighter season eight competitor, has won four fights in a row, all by finish. On April 28, the submission specialist won the vacant belt by defeating Viktor Nemkov via mounted gogoplata.

Magalhaes is 8-5 with 1 no contest overall. Zayats is 14-5 after winning four straight bouts, all by stoppage.

In the second co-main event, lightweight champ Jose Figueroa will attempt to defend his belt against Daniel Weichel.

Figueroa (10-4) seized the championship in March with a second-round TKO of Artiom Damkovsky, marking his third straight win. Weichel, meanwhile, has won nine of his last 10 bouts, including four in a row. His last win came at M-1's July event, when he earned a unanimous decision over Beau Baker.

Kogan told MMA Fighting that a venue for the event is still being worked and "is about to be locked in."