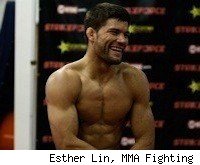 A foot injury has sidelined Strikeforce lightweight Josh Thomson, forcing him out of his September 10 matchup with Maximo Blanco, MMA Fighting has learned.

Thomson hurt himself within the past week, and tests revealed damage that left him unable to complete his training camp and compete. A source with knowledge of the situation confirmed the worst-case scenario for a fighter who has had several injury problems in the past.

The Thomson-Blanco match had been scheduled as a main card bout of Strikeforce's upcoming show in Cincinnati, an event that will feature Heavyweight Grand Prix fights pitting Josh Barnett vs. Sergei Kharitonov and Antonio Silva vs. Daniel Cormier.

The 32-year-old former Strikeforce lightweight champion hasn't fought since December 2010, when he dropped a unanimous decision to Tatsuya Kawajiri. He hasn't competed in the Strikeforce cage since last October, when he defeated Gesias "JZ" Cavalcante via decision.

Strikeforce officials could not immediately confirm Thomson's injury, and it is not known if the promotion will seek a replacement fighter to face Blanco (8-2-1, 1 no contest), who was set to debut after six straight wins in Japanese promotions.