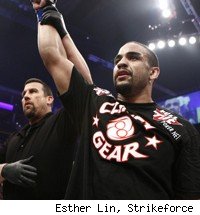 HDNet will broadcast the preliminary bouts for the Strikeforce World Grand Prix semifinals and finals, the channel announced in a joint press release with Strikeforce.

The channel will also televise the official weigh-ins for both events.

For the September 10 semifinals, HDNet will televise four fights.

The event takes place in Cincinnati.

In the Grand Prix semifinals to be broadcast on Showtime, Josh Barnett faces off with Sergei Kharitonov while Antonio Silva takes on Daniel Cormier, who is replacing Alistair Overeem.

Overeem was removed from the competition due to management issues with Strikeforce parent company Zuffa, according to company executives. The two sides remain locked in negotiations about his future.

A date has not yet been established for the tournament finals.