Royce Gracie Wants One More UFC Fight, but Ready to Move on Without It 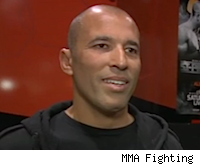 Mixed martial arts pioneer Royce Gracie will be in Rio this weekend when the UFC heads back to his home country, the nation that is credited with giving birth to the sport. Gracie, of course, won't be competing at UFC 134 in Brazil, but that doesn't mean he's not still hopeful of one more match.

There's a caveat to that, as he's not looking for just any match. There's only one fight he wants, and only one organization that can give it to him. Even though Gracie realizes that time is running short to make it a reality, he hopes to have a shot to avenge the one loss he still thinks about. He wants to fight fellow legend Matt Hughes.

"That's the only one," Gracie said on Monday's edition of The MMA Hour. "I want to be able to show up to the fight. [Last time], I didn't show up. It happens."


Gracie said that the first fight against Hughes -- a first-round TKO loss at UFC 60 back in May 2006 -- was the only time in his career he didn't have his A-game, not peaking on the right day.

"That's the only one missing," said Gracie, who avenged his only other in-ring loss by defeating Kazushi Sakuraba.

Gracie said that he has spoken with UFC president Dana White about the possibility, but that he doesn't know if it will ever happen. Hughes, meanwhile, has a match coming up with Diego Sanchez at September's UFC 135.

At 44 years old, Gracie still keeps himself in good shape, saying he lives "a professional athlete's life," by running every day and consistently training. He also travels an extensive schedule, teaching seminars and spreading the message of Gracie jiu-jitsu.

Still, he'd carve time for one more training camp for one last shot at the UFC, and one more shot at Hughes. He said he wouldn't be interested in any other offer from any other organization, suggesting he is mostly at peace with the possibility of never fighting again.

So for now, Gracie will continue teaching his art and in the more near-term, he'll travel to Rio to revel in the homecoming of the sport he helped build the foundation for.

Whether or not he gets that last fight, he has much to be grateful for and there is much to celebrate him for. Regardless of the outcome of one match against Hughes, his contributions to the sport will always be an enormous reason for MMA's growth, and now he gets to enjoy it firsthand in the country in which he grew up.

"It's good it's in Brazil," he said. "It's back where it all started with my father. It's coming back home. There's so much talent in Brazil, so many guys that will probably never get discovered. It's a chance for them to come out and train more. After all, UFC today became a job, it became a sport. Kids wake up in the morning and say, 'I want to be a UFC fighter one day, just like they do in baseball."