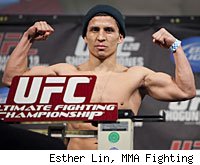 Benavidez is probably the best flyweight in MMA, but he so far hasn't had the opportunity to prove that because the UFC doesn't have a flyweight class. So the tiny Benavidez is fighting bigger guys at 135 pounds, and he's doing a remarkable job of it, beating every single opponent he's faced except the bantamweight champion, Dominick Cruz.

And since Benavidez has already had his chances at Cruz and lost, he's going to remain stuck as the No. 2 fighter in a weight class the UFC doesn't do much to promote. At least until the flyweight class opens up.

1. Dominick Cruz (1): Cruz's upcoming bantamweight title defense against Demetrious Johnson will be shown on Versus, not on pay-per-view, a further illustration of how the bantamweight class hasn't really been fully integrated into the UFC. But it's a great deal for fans to get a pay-per-view-worthy fight for free.

2. Joseph Benavidez (4): When he's not fighting Cruz, he dominates: Benavidez is 15-2 in his career, with the two losses coming to Cruz and the 15 wins featuring eight submissions, three TKOs and four unanimous decisions, none of which was close.

3. Brian Bowles (2): The former WEC bantamweight champion, whose only loss came to Cruz, will almost certainly get the next shot at the bantamweight belt if he can beat Urijah Faber at UFC 139 in November.

4. Urijah Faber (3): Even though he just lost to Cruz in his last fight, beating Bowles might be enough for Faber to get another shot at the bantamweight title. In a largely overlooked weight class, Faber is still the most popular fighter, and he's the only bantamweight the UFC would put in a pay-per-view main event.

5. Demetrious Johnson (5): Can Johnson beat Cruz? It's an awfully tall order. Johnson has good takedowns and is a good wrestler, but Cruz rarely allows his opponents to get close enough to him to take him down. The oddsmakers have installed Johnson as a +300 or higher underdog, which means Johnson beating Cruz would be almost as big an upset as Yushin Okami beating Anderson Silva.

6. Scott Jorgensen (6): Jorgensen draws Jeff Curran at UFC 137, in a fight that Jorgensen should win handily. Curran has had a long and impressive MMA career, but it's been five years since Curran beat anyone notable.

7. Miguel Torres (7): Torres was the best bantamweight in the world a few years ago, but he needs some time to regroup after having lost three of his last five. At age 30 it's not too late for Torres to get back into bantamweight title contention, but younger, faster opponents like Benavidez and Johnson have exposed some flaws in Torres' game.

8. Brad Pickett (8): The British Pickett gets to fight in front of his home crowd at UFC 138, when he takes on Renan Barao in Birmingham, England. Pickett has won 10 of his last 11 fights but has been sidelined all of this year with an injury.

9. Renan Barão (10): Barao lost his first pro fight and has gone an incredible 26-0 since then, including a unanimous decision victory over Cole Escovedo at UFC 130. He hasn't faced anyone nearly as good as Pickett during that streak, however, so he's getting ready for his toughest test yet.

10. Eddie Wineland (9): Wineland is coming off back-to-back decision losses, but he looked good enough in losing to Faber and Benavidez that he deserves to remain in the Top 10. Barely.