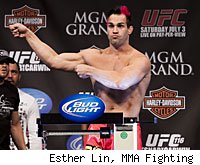 UNCASVILLE, Conn. -- In his first fight under the Bellator banner, Seth Petruzelli got the fight he wanted. He forced grappling ace Ricco Rodriguez into a standup fight, where his unorthodox striking game gave Rodriguez fits. It all culminated in a first-round knockout for Petruzelli at Bellator 48.

Given the win, Petruzelli is practically guaranteed another fight in the organization, but the question is at what weight the fight will be. The Saturday night bout was a 230-pound catch weight. Coming up this season is a heavyweight tournament, and the organization hasn't yet finalized the field. He could be a candidate for that, or he could wait until an expected Feb. 2012 start date for the next light heavyweight tourney.

The former UFC fighter said while he would consider any offer, he would prefer to wait and join the 205-pounders.

"I'd really like to get some of my injuries looked at first," Petruzelli told MMA Fighting shortly after the win.

More: Bellator 48 Results | Win Streak History, but Rodriguez Vows 'I'm Not Done'
Petruzelli said his right elbow has been bothering him since before he faced Ricardo Romero back at UFC 116 last July. He listed a bursa sac injury, tendinitis and floating bone fragments as issues he would like to address, making a layoff of a few months a proposition he could live with.

"It's a whole bunch of things," he said. "I've been working really hard getting ready for fights, and I'd be more than happy to take a few months off to relax."

Petruzelli's win improved his record to 14-6. It also snapped a 12-fight win streak for Rodriguez.

"I really thought he was going to do nothing but shoot and shoot and shoot," he said. "He shot maybe once and pushed me against the cage one time. It worked out for me. It was a best-case scenario. Everything kind of fell into place. The fight went as perfect as possible."

Bellator CEO Bjorn Rebney also told MMA Fighting that Petruzelli would likely be offered a spot in the next light-heavyweight tournament field, though a Feb. 2012 start date is not yet guaranteed.

The current champ is Christian M'Pumbu, but not for long if Petruzelli has things his way.