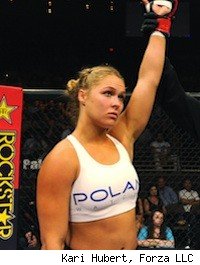 She doesn't mind controversy in general, really. Something has to bring attention to women's MMA and, at least the way Rousey sees it, all the fighters trying to out-nice each other isn't going to do it.

"My goal is not the be the most liked girl in women's MMA," Rousey told Ariel Helwani on Tuesday's edition of The MMA Hour. "I want to be the most talked about girl in women's MMA. If there's a lot of controversy, people saying I suck, I'm cocky, or it was a good fight or an amazing move -- as long as there's polarizing opinions and people want to discuss it."

Rousey, who won an Olympic bronze medal in women's judo in the 2008 Beijing games, improved her MMA record to 3-0 with a first-round armbar victory over D'Alelio on August 12. Referee Steve Mazzagatti's stoppage at the 25-second mark of the bout drew immediate criticism, as D'Alelio clearly didn't tap to the submission.

After the bout, D'Alelio admitted that she'd made some verbal indication of pain when Rousey jumped into the armbar, and that was apparently good enough to bring the bout to a halt.

"I think the referee was right to stop the fight," Rousey said. "They tell you the second that you walk in, like right before you walk in, they tell you, 'If you're in a submission, anything verbal, like if you yell or scream or anything like that we'll call the fight.' So she was very aware that that was the case. It's not like she didn't know that that was the rule or something like that, because they literally tell you right before you walk out."


In case you couldn't tell, Rousey isn't one to hold her tongue, nor is she aiming to be the Ms. Congeniality of the women's MMA world. She had enough of that on the U.S. Olympic judo squad, she said, and she doesn't think it helps raise her profile or that of the sport to do it now.

"When I was in the Olympics and I was representing the United States I had to be very proper, like, yes, this is the right thing to say and I won't say anything about how I think [George] Bush is a retard," Rousey said. "I'm just going to go say what they want me to say and look bright and shiny and go win.

"But doing MMA, you're representing yourself. You're not representing your country. I feel like what women's MMA needs is not some nice girl. Everyone's playing the nice card and they're not willing to go under any kind of criticism and I really feel that that's not what we need if we want to get as much exposure as possible. We need someone more like a Tito Ortiz-type personality -- not that I'm trying to be that much of a d--k, no offense to Tito. But I want to be one of those people who people either love then or hate them and groups of people actually have heated discussions about it. I want there to be attention on the sport, and if I have to attract some bad attention to get that, then fine I'll be willing to be that person."

Not that Rousey is exactly new to being a bit of a renegade, she admitted. Like most male fighters, she did her share of fighting outside of a sporting context, even if it only brought her trouble.

"I've never gotten away with a fight in my entire life. I even got jumped by a bunch of guys once and I beat them up, and they sued me for assault. Every fight I got into in school, I always got a suspension or community service, and it's just never been worth it to me. If I could get in a fight without there being legal repercussions, I would be in a fight every single day. I don't go out to clubs at all, because I know if someone grabs my a-- I'll punch them in the face."

But now that she's trying to make a career out of MMA, Rousey isn't afraid to make herself a lightning rod for criticism, or to use her looks to get attention from fans, even if all her peers might not like it.

"I fought for a long time to get in the Olympics and win an Olympic medal wearing, like, a bathrobe, and I ended up with ten grand and a handshake," she said. "What do you really want me to do? If it was a perfect world where I could walk in there, just roll out of bed and go in there and make the same money, then fine. But I fought for pride for a long time and ended up with nothing but a box full of medals. If I want to make this a career I have to play up the looks side. The people that criticize it are the people that aren't in that situation."

The fact the more attractive female fighters stand to make more money shouldn't come as a surprise to anyone, Rousey said, even if it's a topic some in the sport would rather ignore.

Instead of depending on Gina Carano to be the face of women's MMA, she said, the sports needs "a couple of girls that are very skilled and decent-looking and we wouldn't be in a position where, if one girl goes off to do movies, then the whole sport itself is screwed."

It might not be exactly what every fight fan wants to hear, but then, that's sort of the point. If by speaking her mind, Rousey then makes herself more of a subject of conversation, she seems fine with that.

And while she wouldn't name her next opponent aside from hinting that it would be "an interesting fight," she does have some plans for her fighting future.

At least there's one thing Rousey will never be accused of, and that's setting her sights too low.