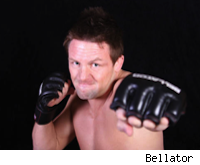 UNCASVILLE, Conn. -- If everything goes according to Joe Warren's plans, he might find himself to be the busiest fighter in MMA. Warren, who is Bellator's reigning featherweight champion, is moving forward with plans to enter the promotion's upcoming bantamweight tournament field. But he also has two other fighters waiting for dates against him with hopes of wresting that featherweight belt from his grasp.

So in what order will he tackle his many tasks? According to Bellator CEO Bjorn Rebney, Warren is locked and loaded for the bantamweight tournament, where he'll take on former Cuban Olympic wrestler Alexis Vila in September.

But after that, things get tricky.

Of course, if Warren beats Vila, he'll advance, and if he makes it through to the tournament finale, he'll be booked up until November. That will leave current No. 1 contender Patricio "Pitbull" Freire waiting ... or not. Pitbull is currently recovering from a broken hand and his return date is yet undetermined.

If he's healthy, he'd get the first featherweight title shot at Warren, but there's another guy in line right behind him, and that's Pat Curran, who punched his ticket to face-off for gold by knocking out Marlon Sandro at Saturday night's Bellator 48.

Curran could potentially face either Warren or Pitbull, depending on who emerges from their bout with the belt. But it may be a while for that to happen. That may not be the worst thing for Curran, who has fought four times in the last four months and could probably use a break.

Rebney said Pitbull should get back into training in the next three to four weeks, and would likely need at least two months of camp before facing Warren.

So things will depend mainly on how far Warren advances and how quickly Sandro's hand heals.

"If Joe ... wins the bantamweight tournament and earns the right to fight [champion] Zach [Makovsky], then he could conceptually have three world title fights in a row," Rebney said.

Here's one more wrinkle for fun: Warren has brought up the possibility of trying to qualify for the 2012 Olympics in wrestling. Think there's a back log of fighters waiting to get at him now? It might only get worse.