Josh Koscheck Returns at UFC 139 in San Jose, May Jump to Middleweight 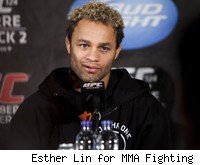 After a lengthy layoff following his title shot against Georges St-Pierre, Josh Koscheck is finally ready to return.

Koscheck said on his Twitter feed Sunday night that he is the latest addition to the UFC 139 card that takes place in San Jose on Nov. 19 – in the heart of his training ground.

But perhaps more interesting is Koscheck saying the fight, against a yet-unnamed opponent, is likely to be at middleweight, moving him up from 170 pounds for the first time since 2005. "My next fight is in San Jose ...," Koscheck said. "Good chance fighting at 185lbs. Should know real soon who."

After a three-fight win streak – a KO of Frank Trigg, a submission of Anthony Johnson and a decision over Paul Daley that got the Brit booted from the UFC for a post-fight sucker punch – Koscheck got a Season 12 coaching spot on "The Ultimate Fighter" opposite St. Pierre.

In their welterweight title fight at UFC 124 last December, St-Pierre peppered Koscheck (15-5, 13-5 UFC) with jabs throughout the bout and broke his right orbital bone. The subsequent surgery has kept Koscheck on the shelf, and his Nov. 19 return will mean a layoff of nearly a year.

Koscheck fought at middleweight on Season 1 of TUF, but dropped from 185 to welterweight after his win over Chris Sanford on the TUF 1 Finale in April 2005. His 18 fights in the UFC make him one of the promotion's longest-standing veterans. His five losses include two to St-Pierre and one to former title challenger Thiago Alves in a fight he took on short notice.

Koscheck is the second fighter to get a "home" fight on the UFC 139 card. Cain Velasquez, his training partner at the American Kickboxing Academy, located in San Jose, headlines the card to defend his heavyweight title for the first time against Junior dos Santos.

Koscheck's move to middleweight is one he has talked about in the last several months. He has said often he will not fight his AKA teammates, and Jon Fitch is one of just a few welterweights that would make sense for Koscheck to fight who don't already have a match booked.

But the move up also gets him one weight class closer to Stephan Bonnar, one of his housemates on TUF 1. Bonnar and Koscheck have been trading barbs on Twitter and in the media after Bonnar's Trash Talkin' Kids t-shirt line made an "Osh Kosh B'Gosh' shirt mimicking Koscheck. Though other fighters, including St-Pierre, Roy Nelson and Brock Lesnar, took the playful shirts in good humor, Koscheck threatened a lawsuit, obtaining former UFC fighter Christian Wellisch as his legal representation. Earlier this year, Bonnar's company, NGauge Inc., shut the shirts down entirely and started a new line called Punch Buddies in its place.

But a fight between Koscheck and Bonnar would mean Bonnar would have to move down from light heavyweight – or that Koscheck would have to move up even more to light heavyweight, or to an agreed-upon catchweight fight. Bonnar has not fought since last December, and had to pull out of a scheduled fight against Karlos Vemola at UFC on Versus 5 earlier this month with a knee injury.

UFC 139 will be the company's first fight in San Jose, the former home base of one-time rival Strikeforce before its purchase by Zuffa earlier this year. Though not yet made official, it will take place at the HP Pavilion. Aside from Koscheck's return to middleweight and the heavyweight title bout between Velasquez and dos Santos, UFC 139 will feature a bantamweight contenders bout between former champions Brian Bowles and Urijah Faber, plus a welterweight bout between Martin Kampmann and Rick Story.