For Pat Curran, It's Another Shot at Gold After Spectacular KO Over Marlon Sandro 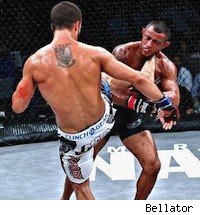 UNCASVILLE, Conn. -- Pat Curran is back for a second chance at gold.

Curran, who lost a Bellator lightweight title fight against Eddie Alvarez in April and then dropped to featherweight, won his second Bellator tournament, this time knocking the highly regarded Marlon Sandro cold with a spectacular headkick finish at Bellator 48.

With the win, Curran gets in line to face the winner of the upcoming tilt between current champ Joe Warren and challenger Patricio "Pitbull" Freire.

Curran spent most of the first two rounds getting peppered by Sandro, who utilized a speed advantage to get to him repeatedly. But during an exchange late in the second round, Sandro looked to keep away from Curran's offense with active head movement. In the fight's most fateful moment, he ducked under what he thought was going to be a punch. Instead it was a right high kick, and Curran connected perfectly, sending Sandro crashing to the canvas. The fight could have been over right then, but Curran was able to land a pair of finishing blows before the referee stepped in to save Sandro from further damage.

"I listened to my corners, look low and kick high," Curran said after the fight. "I just timed it right. I saw him bobbing and weaving, but his hand wasn't blocking. It landed right on his chin."

Sandro, who had been so good up until that point, looked devastated after he returned to his corner. The Brazilian bomber appeared at the post-fight press conference but he spent most of it shaking his head and with a faraway look on his face, probably re-running the finish in his mind.

"Congratulations to Pat, but I will be back and better for the next fight," he said.

It became the second unlikely tournament win for Curran, who was signed into Bellator at the recommendation of his cousin, UFC fighter Jeff Curran prior to the season two lightweight tournament. He got the eighth and final slot in the field, and worked his way through the field before losing to Alvarez in the final.

Curran said the loss lit a fire under him, and he was impressive throughout in the featherweight field, finishing two of his three fights.

He'll have a while to wait until he cashes in his title shot, but he might not mind the layoff; he's fought four times in four months.

"The sky's the limit," he said. "I'm just going to go back to the gym, work hard and keep improving."

In the co-main event, Bellator heavyweight champion Cole Konrad returned for the first time in 10 months, and emerged victorious with a unanimous decision win over Paul Buentello in a non-title bout.

The unbeaten Konrad has taken criticism in the best for his wrestling-heavy style, but against the standup specialist Buentello, Konrad spent most of the fight competing in his opponent's favored position.

Konrad flashed an improved striking game, particularly a strong jab, but never came close to finishing Buentello. Still, it was more than enough for an easy decision by scores of 30-27, 30-27, 29-28.

"I had fun and learned a lot," Konrad said. "I wanted to prove I can exchange punches with a standup fighter. I'm happy. I'm progressing everyday. That's the goal."

Konrad moved to 8-0 with the victory.

Seth Petruzelli made his Bellator debut with a flourish, scoring a first-round TKO over former UFC champion Ricco Rodriguez in a tremendous performance.

Petruzelli flashed his varied standup game, mixing things up with leg kicks, high kicks and head shots. The end came after a pair of spin kicks led to an opening and Petruzelli threaded the needle with a right hand to the jaw that put Rodriguez down.

Petruzelli (14-6) followed with a pair of double hammerfists from the top, and Rodriguez was out for the TKO.

Afterward, Petruzelli said that he hopes to get a slot in Bellator's next 205-pound tournament and capture a title in the division.

"That light-heavyweight belt has my name written on it, and I'm coming for it, man," he said.

In the final main card fight, unbeaten Rene Nazare kept his perfect record intact, stopping Juan Barrantes after the second round when the cageside doctor called a halt to the action. Barrantes' right eye was swollen shut after a pounding over the first 10 minutes.

Nazare controlled the action both standing and on the ground during the duration, but simply couldn't get the finish as Barrantes withstood his barrages and defended on the ground. But after the second round, his face was bloodied and a quick look by the doctor sealed his fate.

Nazare moved to 10-0 with the victory.