Now In Bellator, Seth Petruzelli Wants to Be More Than 'The Guy Who KO'd Kimbo' 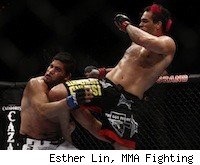 On Thursday morning in Los Angeles, the UFC announced a milestone deal to get mixed martial arts on network TV. It's not the first time, of course, but it has been a while. The first promotion to see its product on network air was EliteXC, the short-lived organization that aired on CBS and built itself around MMA rookie Kimbo Slice.

The decision proved disastrous when late replacement Seth Petruzelli knocked Slice out in just 14 seconds of their October 2008 match. It would be the last time EliteXC ran a show on CBS.

While that was essentially the end of that promotion, fight life went on for Petruzelli. The Ultimate Fighter alumni eventually returned to the UFC, but after an 0-2 stretch, he was released. Now 31 years old, he's moved on to Bellator, where he faces the surging Ricco Rodriguez at Saturday night's Bellator 48 event. It will be the first of a three-fight deal, but like most deals, not a lot is guaranteed past one fight.

Petruzelli, who will fight Rodriguez at a 230-pound catch weight, hopes that a win will propel him into a future Bellator light-heavyweight tournament, and admits that a lot is riding on this fight.

"It's definitely nerve-racking," he said of the current MMA landscape. "You always have to perform to the top of your ability as a fighter or you feel you could get cut, take a pay cut, or fight for a lesser organization. It sucks for a guy like me, but it's the profession we chose."

Petruzelli (13-6) has always been considered a colorful character in the fight game. Though he first came to public notice on season two of The Ultimate Fighter, it was his only match in EliteXC that is most remembered.

On that night, Slice was set to face Ken Shamrock when Shamrock injured himself backstage and could not fight. Petruzelli, who was scheduled for a light-heavyweight bout the same night, stepped in to replace him. Despite the weight differential and short notice, Petruzelli easily dispatched Slice.

The win has continued to follow him around. He's still recognized as "the guy who KO'd Kimbo," and he was once offered a boxing match against him. That one moment is often the first thing people think when they see him fighting.

For Petruzelli, it's a good news/bad news scenario.

"I would never want to take that away," he said. "What it did for my career was huge, but I don't just want to be known as that guy. I want to be known as a great MMA fighter and martial artist, not the guy who KO'd Kimbo. I don't want it to define me."

The win did open up certain avenues for him though. Soon afterward, he opened up a gym, Jungle MMA in Orlando, Florida. It also allowed him to do personal appearances and seminars, which he notes was "nice to make money not being punched in the face."

But after having his second UFC run extinguished by a pair of losses, Petruzelli says he's focused on getting good matchups and being an exciting fighter. With his Bellator signing, he believes he'll accomplish that. A major attraction to him was Bellator's tournament format, which rewards success above all else.

"It's a fighters' organization," he said. "You have to prove yourself and win to get that belt. Nothing is handed to you. That's the way it should be in every organization. Politics shouldn't play a role in fighting. Unfortunately it does a lot, but it shouldn't."

In Rodriguez, Petruzelli is facing a fighter riding a 12-fight win streak. During that 2+ year stretch, Rodriguez has been an MMA mercenary, competing in 11 different organizations and four different countries.

A closer look at the opponents he's beaten raises a few questions though, as Rodriguez has often prized frequent activity and paydays above quality opposition. Among his victims were John Juarez (0-1 at the time he faced Rodriguez), Doug Williams (6-12) and Bobby Martinez (9-12). On the plus side, he's beaten Sengoku veteran Moise Rimbon, M-1 vet Daniel Tabera and veteran Travis Fulton.

That opponent mix makes it hard to know exactly what level Rodriguez is at, but Petruzelli says that is what makes this fight a good measuring stick.

"It's going to tell me if I'm just a stepping stone for him or I belong at the top of the fight game," he said. "He's on a streak. Those guys are good, but were they the top? Not so much. If he does the same thing to me, then I know where I stand, I guess. But I don't foresee that happening."

Petruzelli expects Rodriguez, who has 24 of his 47 career wins by submission, to concentrate completely on takedowns and ground work.

"He knows that he doesn't want to stand up with me, and I know that he wants to take me down, so it's pretty much going to come down to, can he take me down, or can I defend it?" he said. "I'm sure there's no secrets. He knows I'm going to be trying to knock him out."

In fact, that's how Petruzelli sees it ending, with a first- or second-round knockout. It is, he hopes, the restart of his major MMA career. One day in the future, he won't be fighting anymore, and he wants people to have a few more memories of him than the one he made in 14 seconds on one October night.

That said, the subject is never too far away. Just last weekend, Slice made his pro boxing debut, knocking out a journeyman named James Wade. But if things had been different a couple years ago, that pro debut might have been against Petruzelli, who had boxing promoters approach him about facing Slice in a ring shortly after that infamous night. It never happened, of course, and the two men went their separate ways.

"I wish he would've gone straight to boxing years ago instead of wasting time trying to sprawl and learn jiu-jitsu," he said. He waits a beat, then offers, "I still would box him."

The link between them won't be broken anytime soon, but at least they're trying. In a perfect bit of symmetry, they are two fighters restarting their careers, trying not to run from the past, trying to make new memories.