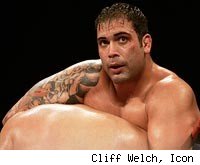 UNCASVILLE, Conn. -- This is the Bellator 48 live blog for Seth Petruzelli vs. Ricco Rodriguez, a heavyweight bout on tonight's Bellator card from the Mohegan Sun.

Petruzelli (13-6) and Rodriguez (47-11) are making their promotional debuts for Bellator. Rodriguez has won 12 straight fights. Petruzelli has won one since his UFC exit last November.

"That was exactly how I had it in my head," Petruzelli said afterward. "I'm so happy."