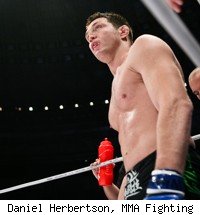 The UFC's Jason "Mayhem" Miller, who will coach the upcoming season of The Ultimate Fighter, was arrested on August 7 and accused of assaulting his sister.

According to the Sheriff's Office in Chatham County, North Carolina, the 30-year-old Miller was arrested for simple assault and false imprisonment. He was released under a $5,000 secured bond.

TMZ reports that Miller and his sister were at a house party in North Carolina, and when his sister said she wanted to leave, Miller put her into a headlock and refused to let her go. Miller's sister eventually was able to leave and informed the Chatham County Sheriff, and Miller was arrested.

Although Miller has not commented publicly on the arrest, he did make what appears to be a reference to the incident with his sister on his Twitter account on August 6, the day the incident allegedly took place, which was also the day of a UFC event.

Miller, who also hosts MTV's Bully Beatdown, will get a major promotional push from the UFC this fall as an Ultimate Fighter coach, and will fight his opposing coach, Michael Bisping, in December.