Bob Sapp Doesn't Mind Being Mocked, as Long as He Gets Paid 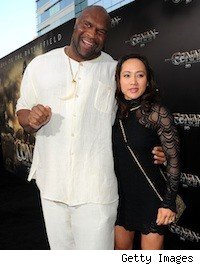 If you ask Bob Sapp, he'll tell you that it doesn't matter what his record is as a fighter.

It doesn't matter that his DIY promotion for an August 26 fight in Germany features him ripping a pair of lederhosen off his thickly muscled torso and smashing an egg on his own face in between cartoonish shouts and flubbed lines.

It doesn't matter if he's a walking joke to you. So he says.

"We determine success in the fight business by revenue," Sapp said when I spoke with him this week as part of his media tour to promote his role in the new Conan the Barbarian remake.

In other words, he's in this strictly for the money, as if there was ever any doubt.

If he gets that money by slipping into an oversized caricature of himself -- an alter-ego he refers to, in all seriousness, as "The Beast" -- then so be it. If his lot in combat sports is the giant who gets routinely slayed, he doesn't mind that either -- as long as there's a paycheck in it.

"Even if you're getting knocked out a lot, [a promoter] wants to put you on his card so you can get knocked out on his card and make things exciting," Sapp said. "He knows at least something's going to happen. If you're very good, that can sometimes actually hurt you. How? Well, the promoter might say, man, he's going to come over here and beat our champion and will raise his price or will never come back and defend the belt."

With Sapp, there's no such concern. It's even part of his appeal. There's zero danger that he's going to roll to a boring decision. There's very little danger he'll even make it out of the first round.

At the same time, when you establish a reputation as the enormous buffoon who can be depended on to crash and burn more often than not, isn't there a point when the money is a hollow comfort?

According to Sapp, not really.

"For me, it's cold, hard business," he said, explaining that the fans who mock him on the internet aren't important because "they don't have the power to hire, nor do they have to power to fire."

"You see the comments made about me on the internet, and the internet is a negatively-charged machine when it comes down to talking fighters," said Sapp. "You never -- or very rarely -- see fighters on there talking bad about other fighters. The reason for this is simple: both of them are giving and receiving brain damage for a living, so neither one wants to put each other down because they're in the same boat. You look at keyboard warriors who just want to get on and talk bad about the people in the sport, and the problem is that everyone who's talking bad, they wouldn't even be able to fill a stadium with three thousand people."

It's a convenient view of the sport from Sapp's perspective, one where drawing power trumps all. Who cares why people are coming to see you, as long as they're coming? It's also a pretty cynical view, but one that has been lucrative for Sapp.

When it comes to sheer career hustle, it's hard to knock the guy. He gets paid as a fighter, a pro wrestler, and an actor. In the new Conan movie he even got to "tackle a horse" thanks to movie magic, he said. In his opinion, "it looks really cool."

And while some people might look at his record and conclude that he doesn't seem to be taking the sport seriously much of the time, he said, they don't realize that it's all a consequence of that same hustle.

And maybe he's right. Maybe nobody should be doing it the way he has. Not unless their goal is to make as much money as quickly as possible, and they don't care what anyone thinks about them once the ride is finally over.