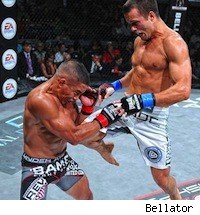 All 18 fighters scheduled for Saturday night's Bellator 48 card made weight for the show, which will take place at Mohegan Sun Arena in Uncasville, Conn.

Both fighters checked in at 145 pounds for the final. The victor will eventually take on the winner of an upcoming match between Joe Warren and Patricio "Pitbull" Freire.

Curran (15-4) won the season two lightweight tournament in 2010 but lost to reigning champion Eddie Alvarez in a five-round decision. After dropping to featherweight, he beat Luis Palomino and Ronnie Mann to advance and face Sandro.

Sandro signed with Bellator in June and won his first two tournament bouts, defeating Genair da Silva and Nazareno Malegarie, both by decision.

In the co-main event, heavyweight champ Cole Konrad weighed in at 264.5 to face the 255-pound Paul Buentello in a non-title match. Konrad hasn't been in the cage since defeating Neil Grove via submission and capturing the championship last October. An April bout between Konrad and Buentello was postponed after a Buentello injury, and now he gets his chance to return.

In another featured bout, Ricco Rodriguez looks to extend hist 12-fight win streak against Seth Petruzelli. Both fighters made it under the 230-pound catch weight.