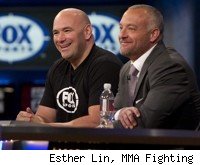 The UFC is headed to Fox, which, according to Dana White, means big changes are in the works. That gladiator who's been gearing up at the start of every televised event for what feels like centuries now is just the first to go. You can bet he won't be the only casualty as the UFC upgrades its TV presence courtesy of a seven-year deal with FOX, which will bring a live UFC event to network TV this fall.

In other words, remember how your grandfather used to tell you about boxing's heyday, when you could sit down on Friday night and watch Rocky Marciano or "Sugar" Ray Robinson duke it out on network TV in between commercials for shaving cream and hair tonic?

Yeah, this is kind of like that. Or at least, it could be, even if it probably won't change the entirety of the MMA landscape the way some might expect.

Here's where we are obliged to remind ourselves that this is not MMA's first foray into live network TV. EliteXC did it, and so did Strikeforce, but both organizations did it with CBS, which never got entirely comfortable with being in the "bloodsport" business and so didn't push MMA quite as hard as it could have.

But with a seven-year deal that will bring UFC programming to several different FOX properties, from the cable TV hinterlands of Fuel and FX to the network giant itself, the UFC now has a TV partner that isn't just dipping its toe in the water. As White likes to say, the big challenge for a promoter is simply letting people know there's a fight on Saturday night. When you can wave that banner during NFL games and sitcoms alike, that part of the job gets a lot easier.

At the same time, there were some conflicting messages coming out of Thursday's press conference to announce the landmark deal. For starters, take the bold claim from FOX executives that you can hardly find an 18-35 year-old man in America who doesn't know something about the UFC.

A) That's not completely true, as any MMA journalist who has ever tried to explain what he or she does for a living to a confused stranger on an airplane already knows, and B) Even to the extent that it is true, what does that mean for the sport's potential growth via network television if the public has already heard about MMA and formed an opinion on it?

Say, for example, you're an average American pro football fan. Say you see an ad for an upcoming UFC event on FOX flash across the screen while you're watching your beloved Seattle Seahawks play (a stretch, I know, but stick with me). Say you're one of those aforementioned American males who has heard of the UFC before, who maybe even knows who Brock Lesnar is, but who has never seriously considered sitting down to watch an entire event before.

What's going to change your mind this time?

Maybe it will be the fact that it's on free TV, and on a channel you don't have to search for. Maybe it will be the association that already exists in your mind between FOX and pro sports you enjoy. Or maybe it will be nothing, since you've heard of the UFC before and made either an unconscious or conscious decision not to learn anything else about it, plus the Seahawks just fumbled on the goal line so you have other things to worry about just now.

The difference may be the UFC's willingness to roll out its biggest stars for free events on FOX, foregoing short-term pay-per-view dollars for the opportunity to create some long-term fans. The things that make Lesnar a guaranteed pay-per-view draw are the same things that might convince John Q. Sportsfan to forego his Saturday night movie date so he can stay home and watch the UFC on FOX.

Is that guy going to become a Gray Maynard fan after that one night? Probably not, and he may never get interested enough in the sport to so much as chip in on a pay-per-view. Does it matter? Not really. That's because the UFC is already legitimate. It's already mainstream, or at least as mainstream as two men fighting in a cage is ever going to get.

The FOX executives are mostly right when they say that, in general, most American males have some idea of what the UFC is. They also have some idea of whether they like it or not, and the channel it's broadcast on isn't likely to make a huge difference either way.

Of course more people will watch a UFC event on FOX, if only because more people watch what's on network TV in general, even when it's godawful. Some people might even take it more seriously when they see it on network TV, but some will also see it as the sporting version of 'Temptation Island' and dismiss it just as easily as they did when it was stuck way up on the cable dial.

Still, the increased viewership on those network TV nights will make a huge difference to sponsors and to the fighters who rely on those sponsors for a hefty chunk of their annual income. Make no mistake: this is big.

But the fact that the UFC managed to make a seven-year deal with a network like FOX should tell us that MMA is already big. The UFC is not becoming mainstream or legitimate because of this deal; the UFC got the deal because it's mainstream and legitimate.

That doesn't mean the entire world will suddenly fall in love with MMA. Anything with this much real blood in it has built-in limitations. If you hated the idea of two guys in compression shorts elbowing each other in the face on Spike TV, you'll probably still hate it on FOX and FX.

Too bad though, because you're probably going to have to hear about it a lot more often now.