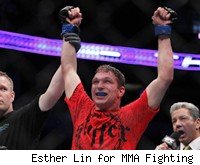 A featherweight bout between Tiequan Zhang and Darren Elkins has been added to the UFC 136 card.

The UFC made the bout official Thursday for the Oct. 8 pay-per-view at the Toyota Center in Houston. Both fighters are coming off victories.

Zhang (13-1, 1-0 UFC) debuted in the WEC last year with a submission of Pablo Garza, but followed that up with a loss to Danny Downes. In his UFC debut at UFC 127 in February, he earned a quick first-round submission of Jason Reinhardt.

Zhang was the UFC's first fighter from mainland China and was a much-heralded signing last year. In a statement, UFC president Dana White said "The Mongolian Wolf" was "China's best prospect."

Elkins (12-2, 2-1 UFC) made his featherweight debut at UFC 131 in June and won a unanimous decision against Michihiro Omigawa. But White disagreed with the decision – which was scored 30-27, 29-28, 29-28 in favor of Elkins – and elected to give Omigawa his win bonus.

In Elkins' first two UFC fights, at lightweight, he won with a quick injury TKO against Duane Ludwig in his debut, but followed that with a first-round submission loss to Charles Oliveira.

Additionally, sources close to Elkins' camp told MMA Fighting on Thursday that the fighter signed a new four-fight deal with the UFC that will begin with the Zhang fight.