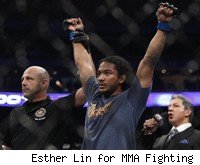 Ben Henderson isn't the type to call someone out.

But he is, apparently, the type to call everyone out. Not yet 48 hours removed from what he called the biggest win of his career – and that includes winning and defending the WEC lightweight title – Henderson kept his options for what's next wide ranging.

"I want to fight everybody," Henderson told host Ariel Helwani on "The MMA Hour" on Tuesday. "Literally. I want to beat everybody on the 155-pound roster in the UFC. I want to smash everybody. I want everybody put on notice. I'm not coming for a belt. I'm coming to beat you."


Henderson was a slight underdog Sunday against Jim Miller, who had built up the UFC's longest winning streak outside champions Anderson Silva and Georges St-Pierre with seven straight victories. But after surviving some first-round submission attempts from Miller, Henderson turned on the heat and dominated the fight, even winning 30-26 on one judge's scorecard.

UFC president Dana White had intimated that Miller was in line for the next title shot if he took out Henderson. With that scenario off the table after Sunday night, White and matchmaker Joe Silva have a decision on their hands, and Henderson could be at the heart of it.

The former WEC champ, who lost his title in December to Anthony Pettis after Pettis delivered his now-famous kick-off-the-cage to Henderson's face, sees no reason why he shouldn't' get the next title shot after Frankie Edgar and Gray Maynard rematch on Oct. 8.

"My job is to fight," Henderson said. "I will say if Dana, Lorenzo (Fertitta), Sean (Shelby) and Joe give me a title shot, I will take it and I will have a great performance. But if it's not a title shot, that's fine too. Going against the No. 1 contender, after you have that sort of performance against the No. 1 contender, what else is there? Not a close decision, not squeak by ... what's the next logical step? There's the winner of the title fight."

Some of the other names in the lightweight division that have gotten traction are Clay Guida, Melvin Guillard and Donald Cerrone. Guillard has won five straight, but already has a fight booked against Joe Lauzon at UFC 136, the same night Edgar and Maynard rematch for Edgar's belt. Cerrone just beat Charles Oliveira to see his streak reach five – three in the UFC after winning his last two WEC bouts. Guida is coming off a unanimous decision win over Pettis, who was the top contender until the Edgar-Maynard draw put him in a holding pattern that Guida spoiled.

Guillard, Guida and Cerrone are all members of the Greg Jackson camp and aren't likely to fight each other any time soon. So the fight that has been mentioned the most is between Guida and Henderson, with the winner getting next crack at the belt.

Guida may be thinking the same thing – why fight Henderson, risk a loss and get sent to the back of the pack the way Henderson did to Miller and Guida did to Pettis? Which means that they're both likely just waiting for the UFC to make a decision.

Tuesday, also on "The MMA Hour," Henderson's agent, Malki Kawa, said he sees no reason his client shouldn't just be next in line. Though Henderson has only won two straight fights, both in the UFC, his only loss since 2007 came to Pettis in December, and it was a fight that likely was decided by Pettis' kick in the final minute of the fight. Had Henderson won the fifth round, he would have walked away with a split decision win instead of a unanimous decision loss.

"I think he deserves a title shot," Kawa said "My philosophy is, Jim MIller was the No. 1 contender. To me, (Henderson) beat up the outright No. 1 contender. He didn't just beat the guy in a close fight – he dominated this guy. He separated himself from a lot of guys."

Henderson said he prefers more time than most in between fights so he can actually find the areas he needs to improve and work on them. And thanks to some elbows to Miller's head, he'll be waiting on the results of an X-ray, too. If he is to get the next lightweight title shot, he'll likely have plenty of time to wait. Assuming the winner of Edgar-Maynard comes out of that fight reasonably healthy, his first defense is not likely until early 2012 at the soonest.