UFC on Versus 5 Medical Suspensions: Jim Miller Among Six Fighters Out Indefinitely 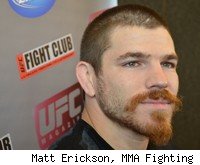 Thirteen fighters from Sunday's UFC on Versus 5 card were given medical suspensions following their fights by Wisconsin's Department of Safety and Professional Services, which oversees MMA and boxing in the state.

The medical suspensions were released to MMA Fighting on Tuesday. Six fighters are suspended indefinitely by the commission, pending medical tests. A total of 11 fighters were given no suspensions.

Among the most high-profile suspensions, co-main event fighter Jim Miller is out indefinitely, as are Amir Sadollah, Duane Ludwig and CB Dollaway.

Miller must undergo a physical and a CT scan before he will be cleared to fight again. Taking a seven-fight winning streak into his fight with Ben Henderson, and with a likely title shot up for grabs if he won, Miller was dominated by Henderson, a former WEC lightweight champ.

Sadollah, who lost a unanimous decision to Ludwig, must have a neurological exam and CT scan before he can compete again. Ludwig, one of just four winners on the card to get suspensions, must undergo a physical, a CT scan and have his right hand cleared before his next fight.

Dollaway had a strong first round against Jared Hamman, and may have been close to getting the fight stopped late in the round. But Hamman survived and turned things around in the second to get a TKO of the former runner-up of "The Ultimate Fighter." Dollaway is suspended indefinitely, pending a neurological exam and CT scan.

Also out indefinitely are T.J. O'Brien, who suffered injuries to his ribs and leg, and Kyle Noke, who tapped to a heel hook from Ed Herman that wound up doing what appeared to be severe damage to his knee. Noke needed help from the cage and will need an MRI on his knee before he is allowed to return.

Kyle Noke: Suspended indefinitely, must have MRI on knee.

Duane Ludwig: Suspended indefinitely, must have physical exam, CT scan and must have right hand cleared by x-ray.

Ben Henderson: Suspended 30 days, must have elbow cleared by x-ray.