The Forward Roll: UFC on Versus 5 Edition 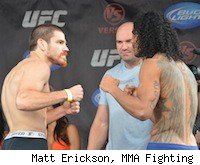 UFC on Versus: Hardy vs. Lytle could have been the rarest of events that saw both main event fighters exit the UFC right after competing. Instead, it saw Chris Lytle walk away on a glorious note, retiring after his submission win, while Dan Hardy was given one more chance from UFC co-owner Lorenzo Fertitta despite losing his fourth straight bout.

In reality, it was a fair conclusion for both fighters, who fought a hard-nosed battle for nearly 15 minutes before the ending. Lytle gets the distinction of walking away on a high while Hardy is afforded the opportunity to decompress, clear his mind and determine a new course of action going forward. While any thoughts of returning back to contender status are for off into the future, he has a pulse, and for now, that will have to do.

With that, we take a look at what might be next for Hardy and the rest of UFC on Versus 5's key participants, in this edition of The Forward Roll.

Dan Hardy
It's been a brutal 17-month stretch for Hardy, who lost bouts to Georges St-Pierre, Carlos Condit, Anthony Johnson and now Lytle. Afterward, he mentioned wanting to take some time off, and that's a request that should be granted. Losing is often harder on the mind than the body, and Hardy should get the chance to heal both.

Hopefully, we don't see him back in the octagon until spring is breaking. Given a lengthy layoff, it's tough to project who he might face -- a lot will happen in the next six or seven months -- but someone like TJ Grant or Amir Sadollah sounds about right.

Ben Henderson
Casting aside Lytle's emotional goodbye, Henderson was the star of the show, with a spectacular performance against Jim Miller in a high-stakes bout.

The fact that Miller was riding a seven-fight win streak made it impressive enough as it was, but having seen Miller throughout his career, we can say that he just doesn't get dominated like that. Not even current champ Frank Edgar or current No. 1 contender Gray Maynard handled him the way Henderson did. Impressively, he continues to improve his standup game, but does his best work with wrestling and ferocious ground and pound. He also keeps a ridiculous pace, even for a lightweight.

The performance should quiet all doubters about Henderson's ability and just how far he can go. It also rockets him up the contenders list, and he gets stars from here onward.

The next man on his list should be Clay Guida, who is riding a four-fight win streak and has nothing scheduled. The winner should next fight for the title.

Jim Miller
Sure he gets knocked down a couple of pegs, but given his recent run, there's no reason to write Miller off as a future No. 1 contender.

The good news for him is that there is such a glut of top lightweights that there should be no problems in finding him a good matchup. The two best possibilities may be Dennis Siver, who is currently riding a four-fight win streak, or Sam Stout, who is coming off a fantastic knockout over Yves Edwards. Another possibility is Anthony Pettis, who lost to Guida in June.

Donald Cerrone
Previously considered an uneven performer, Cerrone seems to have figured out the issues that led to slow starts in the past. His first-round TKO win over the promising Charles Oliveira was his third victory of 2011 and fifth straight overall.

A good next step for him would be Jeremy Stephens, who has captured four of his last five, with his only loss coming in a close split-decision.

Charles Oliveira
For the first time in his career, Oliveira looked outmatched in the loss to Cerrone, who easily handled him in the striking and overwhelmed him on the ground. After losses in two of his last three, he has a decision to make as far as if he wants to stay in the 155-pound division or move to featherweight.

The UFC usually doesn't force their hand in these matters, but they could cut Oliveira if they wanted to, so they have the leverage to ask him to reconsider a move. I think he will try 145. Let's throw him in with a ground shark like Javier Vazquez and see if he sinks or swins.

Duane Ludwig
After a long welterweight run, Ludwig returned to welterweight and has now won two straight after throttling Amir Sadollah. The knock on Ludwig has always been grappling troubles, and his last two matchups have been favorable as he's faced a pair of strikers.

That should change in his next match, but it probably won't. Instead, the UFC will likely match him up in another bout that will guarantee good standup action. Let's slot him in to face Matt Brown.

Jared Hamman
The wiry Hamman always seemed out of place among the UFC's massive light-heavyweights. In his middleweight debut, he looked to be in the right class.

As a relative newcomer to the division, he shouldn't be rushed along. Rafael Natal is about right.

Ed Herman
It's hard to be believe, but Herman and Michael Bisping are the only two fighters remaining in the UFC from season three of The Ultimate Fighter. Unfortunately, he's had terrible luck with injuries, missing nearly two years of action before returning with back-to-back wins.

He was fighting Aaron Simpson when he first injured his knee. It would be nice to give him another crack at Simpson, but the "A-Train" already has a fight scheduled in October, so we'll have to go to plan B, Constantinos Philippou.

Joseph Benavidez
Benavidez is in a terrible position right now, stuck between a rock and a hard place. The rock is Dominick Cruz, who has beaten him twice, yet is standing in front of him as the champion, meaning no rematch is likely anytime soon. The hard place is the lack of a flyweight division, which he will likely relocate to as soon as the UFC institutes it. So he is left to continue on with little chance of fighting for a belt until either Cruz loses or the UFC makes the move for 125-pounders.

There really aren't many compelling fights for him right now. One possibility is a Miguel Torres rematch. The other is surging 20-year-old Michael McDonald.