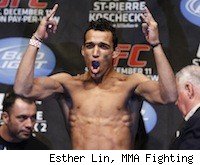 Hampel said he was planning to meet with Oliveira and his coaching staff this week to discuss the possibility.

The decision isn't quite so simple as dropping a few pounds, however. While Oliveira usually walks around at about 164 pounds, he is still growing. Hampel said that when Oliveira signed with the UFC last summer, he was 5-foot-10. He is now 6-foot-2.

Hampel, who is 6-foot-6 and 235 pounds, said that Oliveira's shoulders are the same width as his, and his arms are just as long. So the ongoing growth spurt makes a downward move tricky.

"He does have a big frame," Hampel said. "In another five years, I see him fighting at 185. But right now, we're considering him moving down."

Asked if Oliveira has a preference, Hampel said that he's willing to fight at any weight, noting that before he signed with the UFC, he fought at 170 pounds while in Brazil. But after starting his professional career with a 14-0 run, the 21-year-old has suffered his first setbacks.

First, he lost to Jim Miller in a submission defeat at UFC 124 last December. Then, he had a victory over Nik Lentz changed to a no contest due to an illegal strike at June's UFC Live event. In his most recent fight just days ago, he was TKO'd by Donald Cerrone .

Despite the recent problems, some of his advisers don't see weight as an issue. As Hampel noted, Oliveira once defeated Efrain Escudero even after Escudero missed weight, weighing in four pounds too heavy.

"People say that Cerrone came in really big but he landed a great liver shot," he said. "If anyone lands a perfect shot, especially on the liver, I don't care if you're 135, you'll get the same response. But we're going to keep our options open."

The decision will ultimately be made by Oliveira, Hampel, and Oliveira's coaches, Jorge "Macaco" Patino and Ericson Cardozo. Oliveira will also try a test cut as soon as next week, according to Hampel, to see how the fighter's body responds.

The UFC might also request that Oliveira change weight classes, and since it's something they've inquired about in the past, it's a possibility. If it comes down to keeping his job, Oliveira will make the change, but Hampel says to the born fighter, weight is just a number.