UFC 134 a Homecoming for Brazilian Talent 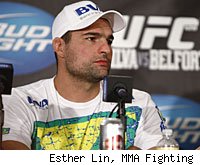 For as long as mixed martial arts has existed -- and even before anyone used the term -- Brazil has produced a wealth of fighting talent. But as a lucrative spectator market for the UFC, Brazil has lagged far behind the United States, not to mention Canada and even some European countries that have never produced much in the way of MMA talent.

With UFC 134 taking place in Rio de Janeiro on August 27, however, the UFC thinks it may have finally reached the point where it can showcase its Brazilian fighters at home, and see them get as much recognition from Brazilian fans as they get in North America.

"It was very important for us -- Brazil has exploded in popularity for the UFC," said UFC President Dana White. "It's a big deal."

UFC 134 sold out the HSBC Arena, which frequently hosts concerts and will be the venue for basketball and gymnastics at the 2016 Olympics, on the first day that tickets were available. White said the UFC underestimated the demand for tickets in Brazil.

"We're very excited it was a fast sellout -- things sold out in an hour," White said. "We were a little gunshy down there. We had a 14,000-seat arena down there and 350,000 people were online for tickets. We probably could have done a bigger arena."

Fourteen Brazilians will participate in the 12-fight UFC 134 card, and one of them, former light heavyweight champion Shogun Rua, said Tuesday that he's pumped about fighting back home, where he hasn't fought since 2003, when he was 21 years old.

"I'm very happy to be fighting in Brazil," Rua said. "I'm very motivated to do a good showing and to give something back to the fans who give me so much support, not only here in Brazil but all over the world."

White said he believes recent fights featuring Brazilian stars, including the Anderson Silva vs. Vitor Belfort fight in February, have garnered more attention for the UFC than it has ever before received in Brazil. And he said he thinks Brazil represents a big step toward the UFC's southern expansion.

"We're doing a lot in Latin America and Brazil is our first big step," White said.

One of the reasons there are so many great fighters from Brazil is that the culture has long been accepting of full-contact martial arts, whereas in other countries, there's resistance to MMA.

"As you go into every market it's different," White said. "There's no doubt about it: Brazil will be a zillion times easier than the UK and Europe have been. . . . And there's so many talented guys that come out of there. Not just talented guys, literally icons of the sport come from Brazil. It's the country where this thing started ... it's a fighting culture there. People get it and like it."